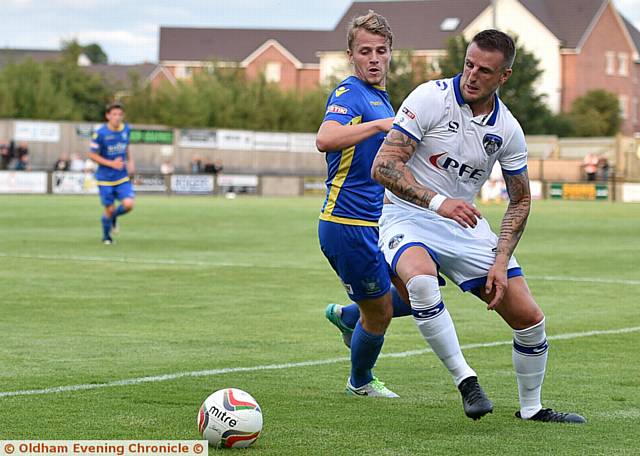 GEARING UP TO TURN THE TABLES ON THE BREWERS . . . Athletic' influential captain Peter Clarke (right)

ATHLETIC skipper Peter Clarke believes his side can turn the tables on Burton Albion tonight and make it into round two of the Carabao Cup.

Clarke (35) goes up against former team-mate Connor Ripley in a game that is also likely to feature former loan midfielder Matt Palmer making a return to SportsDirect.com Park (7.45pm kick-off).

It's a chance for Athletic to put the disappointment of losing the first Sky Bet League One game of the season to Oxford behind them - as well as an opportunity to boost confidence ahead of Saturday's trip to Walsall.

"We know we are going to be in for a tough game, no matter what," Clarke said.

"Whether they make changes or whether they select their perceived strongest XI remains to be seen.

"But it will be difficult and Nigel Clough will have his side well-drilled.

"It's a game we are confident for, that we can get a good result.

"It's another opportunity to get a win and that breeds confidence.

"We are realistic about Oxford and not too down about it. In parts we played very well and overall were good value for a point, but some decisions at key moments perhaps had a little influence on things.

"We regroup and go again and have to make sure we go out and take the cup tie to Burton.

Sheridan wants another goalkeeper to challenge Ben Wilson for the shirt and admitted that his own chase for Ripley had an adverse effect on the search for a number one during the summer.

"We wanted Connor back, but it wasn't to be," said Sheridan. "He's gone to the Championship where he wanted to go and good luck to him, he's a great lad and I hope he does well there. He's got a move to the Championship because of the way he performed at Oldham last season, but I'm glad the saga is over.

"I won't deny it, we were hoping that there was a possibility of him coming back or that we had a really good chance of him coming back. It wasn't to be. It dragged on and it has affected our goalkeeper situation, but now we move on."