You are Here: Home » News » Heroes all as mighty Liverpool felled

Heroes all as mighty Liverpool felled 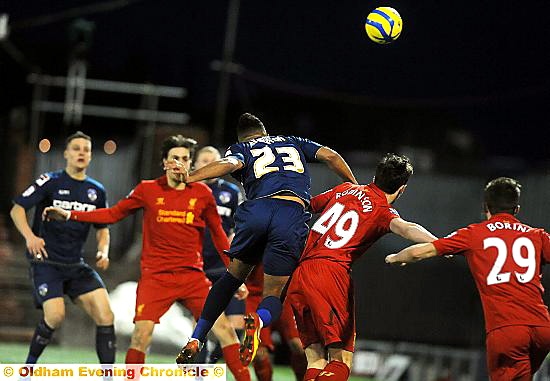 DOES it get any better than this?

Smashing three goals past the seven-times FA Cup winners, at a packed-out Boundary Park, to make it into the fifth round. It’s the essence of dreams.

Scorers Matt Smith and Reece Wabara have entered Athletic folklore. They helped beat the club who have been champions of Europe five times. The famous Anfield club once managed by Bill Shankly, who have a living legend in their ranks in Steven Gerrard. A club supported by millions around the globe.

Athletic earned their passage through a performance brimming with passion. Nobody present will ever forget the moment the final whistle was blown by referee Lee Probert, signalling a pitch invasion.

Smith had never before scored on home soil for Athletic. What a day to get up and running.

When he woke yesterday morning, the player once released as a teenager by Cheltenham Town can't possibly have envisioned turning Liverpool centre-back Sebastian Coates into a quivering wreck.

Smith, who netted twice on an unforgettable early evening at a packed-out Boundary Park, was described as "unplayable" by his manager Paul Dickov. That might be a slight but understandable exaggeration.

But as he leapt to win every header — including the one for the opening goal two minutes in, dominating Coates in the air — Liverpool's defence rocked, rolled and fell apart.

Some of the visitors' hapless players, notably error-prone goalkeeper Brad Jones, have plenty of explaining to do to their manager.

Luis Suarez equalised after a slaloming run and shot through Dean Bouzanis.

But after Smith had tapped home his second, just before half-time, Wabara nodded a third and even Joe Allen's deflected volley wasn't enough to stop the biggest result for Athletic since city neighbours Everton were dispatched thanks to Gary McDonald's rocket at Goodison Park five years ago.

Athletic, 19th in the division and only a point clear of the drop zone, went ahead when Mchangama rescued a scuffed Lee Croft shot to fire in a centre which Smith headed powerfully into the turf and beyond Jones.

The touch paper was lit. Boundary Park exploded with a huge roar.

The equaliser could have pricked the bubble. But Dickov's men refused to go into their collective shell.

As the first half drew to a close, Athletic retook the lead. Smith had forced Jones to tip over the bar before he profited from a goalkeeping error.

Wabara's cross from the right looked innocuous but the ball bounced off the 'keeper's chest and out to Croft. His dug-out cross-shot was turned by Smith into an empty net.

After Wabara's superb header from Carl Winchester's cross put Athletic 3-1 up, torrential rain fell and the twin introduction of Gerrard and Stewart Downing turned up the heat.

Athletic were understandably nervy and Joe Allen reduced Liverpool's deficit to one by connecting sweetly with a volley which was deflected past Bouzanis.

And after Gerrard had shaken the crossbar, Athletic had six minutes of additional time to negotiate.

Manfully, magnificently, they managed it.

In tonight’s paper: special 12-page victory supplement with masses of stories player comments and pictures. Also available in the eChron (click tab above)