You are Here: Home » News » Grounds in control anywhere 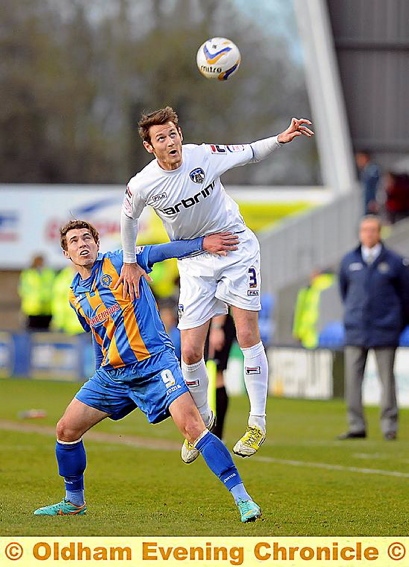 MR VERSATILE . . . Jonathan Grounds has played at left-back and in the centre of defence for Athletic.

JONATHAN Grounds doesn’t mind where he fits in across the Athletic back line on a match-day – so long as he is in the team.

Thornaby-born Grounds (25) has been one of Athletic’s stand-out performers of late.

He began the season at left-back but has since been moved by boss Lee Johnson inside to partner James Tarkowski, where he has been earning rave reviews.

He said: “I’ve always switched between the two positions wherever I’ve been. That’s going back to my junior and youth team days. It’s got to be a good thing to be proficient in different positions

“I must admit I didn’t feel too comfortable for the first few games. I was having to get my bearings again. But I’ve always been happy playing in either of the two positions.”

Grounds began his career at Boro where he made 37 appearances before joining Athletic in the summer of 2012.

Looking ahead to the clash with high-flying Orient this weekend, Jonathan feels there are grounds for optimism.

He added: “They look a good side who really work hard for one another.

“If we can match that work-rate we have definitely got enough in our dressing room to get some goals.

“We have worked on a few things in training and I’m hopeful people will see the fruits of that on Saturday.”