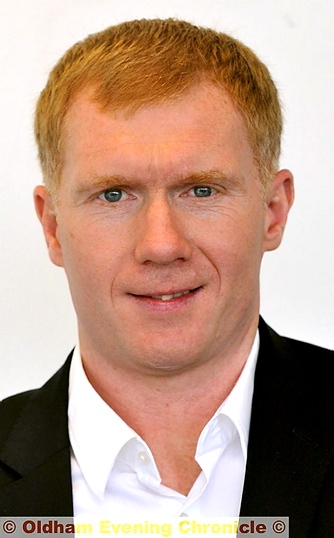 PAUL Scholes won’t be taking on the managerial reins at his beloved Athletic any time soon — but the legendary playmaker has given a ringing endorsement of current boss Lee Johnson.

The 39-year-old former Manchester United star says he has no desire to get back into the professional game as a coach. He recently ended a stint at Old Trafford alongside interim boss Ryan Giggs, and before that he unofficially assisted Nicky Butt with United’s academy side.

But even a call from Athletic — the club he has watched regularly since childhood — wouldn’t entice him back into the professional game.

“I've no plans to go down the coaching or management road,” said Scholes exclusively to the Chronicle.

“If something came up in the future I would think about it, but not at the moment.”

Instead Scholes will continue to keep an eye on events at Boundary Park, where he hopes Johnson’s hard work will help to fill the gaps left by departing players in tge last few few weeks.

“Obviously, I would like to see Athletic doing better than they are now but it is difficult,” added Scholes, who has attended matches home and away since his retirement from playing.

“There is no money around for the manager, but I think he has done a great job. He has lost a couple of players since the end of the season bu, hopefully he can bolster the squad with more good players.”

Having seen Johnson in action at close quarters late last year on a surprise visit to oversee training, Scholes is confident the team is in good hands.

“I was really impressed with him,” he said. “He looks like a great appointment. He deserves success as a hard-working manager and hopefully he can bring that to Oldham.”

JOEL Coleman has signed his first professional deal with Athletic.

The highly-rated 18-year-old goalkeeper has penned a two-year contract with the club, having helped guide the under-18s to Lancashire FA Youth Cup glory last season.

Coleman, who hails from Worsley, has been with Athletic for seven years.

He was an unused substitute in the last seven first-team fixtures in 2013-14, following Mark Oxley’s recall by Hull.