You are Here: Home » News » There’s no masking the elation that one word can bring

There’s no masking the elation that one word can bring 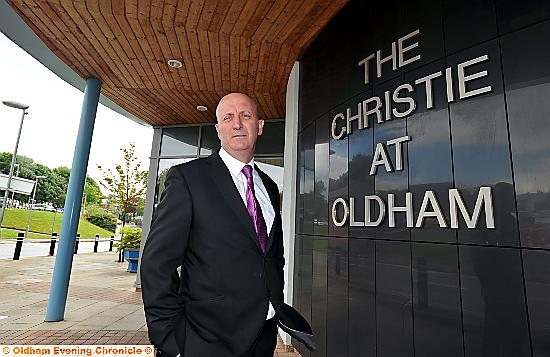 Chronicle managing editor David Whaley at The Christie in Oldham

CHRONICLE Managing Editor’s series of articles on his journey through throat cancer.
THREE months to the day after we heard the dreaded word “Cancer” it was another “C” word that was music to our ears... “CLEAR!”

It had been six weeks since the 16 sessions of radiotherapy were completed under the wonderful team at Christie Oldham — and under the plastic mask that became such an integral part of my day.

The two weeks that followed were, as predicted, the toughest as the radiation got to work on the T1 tumour on my vocal cords.

A holiday away from mobile phones and meetings enabled me to get my voice back to something close to normal and I had been managing to eat much more substantial foods after having to resort to the fish, mash, and the soft options.

I felt great... but as I ticked off the last of that day’s news page proofs and headed for the door, I can tell you I was as nervous.

As previously documented, I did not even have cancer on the radar when I went to see the specialist back in April so nerves did not enter into it.

Even going for the mask fitting and the radiotherapy itself seemed just a process that had to be overcome.

But had it all worked? I was aware of what was at stake. If the tumour had survived or thrived then the next steps would involve chemotherapy and/or surgery.

I knew that my voice, my lifestyle and, ultimately, my life would be on the line if this bastard got a hold (excuse the language but it makes you feel so angry).

But I was not contemplating that as my wife Wendy and I drove across to meet the Christie team at North Manchester.

The waiting room at the oral and maxillofacial unit is a tough place to be. Some of the impacts are very visual. I don’t need to paint you pictures.

You tend not to stare but as I came out from the obligatory pre-match weigh-in I caught the eye of a friendly face — Adrian Alexander, former rugby star and latterly councillor of this borough.

He looked worried (it could have been a mirror). He has been on a similar journey though with a more aggressive cancer. He was waiting for his three-month results. They called his name and off he and his wife went down the corridor.

When he bounded back out 15 or so minutes later he didn’t need to say a word. We embraced. Truth is he hugged me like he was tackling in his prime.

Magic moment. They wished us well.

He had seen Dr Lee, the same oncologist. He said he had put a word in for me. Joker! It would soon be my turn.

As we went down the corridor and into the office where the team were waiting I gripped Wendy’s hand just a little tighter. “Come on, let’s do it.”

Questions and more questions and then the most revolting-tasting anaesthetic imaginable in your mouth and nostrils prior to a camera tube in via the left nostril (hope you are not eating while reading this).

To say that he had a good look around is an understatement. Not pleasant.

“Well the tumour has gone and the vocal cords look clear and normal,” said Dr Lee.

I squeezed Wendy’s hand again and looked across at her. The smile was different. She too had been wearing a mask all these weeks.

It was a mask with a smile painted on it to keep me going.

It was a smile that showed the world we were carrying on our lives.

The team gave us a few minutes to take in the enormity of the situation.

Obviously this is just the first positive snapshot.

The cancer CAN return. But I have a 90+ per cent of staying clear, helped in no small part by the fact that I am a non-smoker.

If it is going to come back it is most likely to be in the next 18 months so the trips to North Manchester will be every six weeks. More of that horrible taste!

That will be a small hardship if we can stay on top of this. Beyond that period the checks will become less frequent. If it gets to five years I will be discharged.

There might be some speech therapy work to see if I can make my voice still stronger.

For now “Keep Smiling” is not a problem. We have just won the lottery and the pools rolled into one and we intend to live life to the full.

Without doubt I have been very, very lucky.

Had it not been for early diagnosis this could have been so different. I will be forever grateful to my family for “insisting” I go and get checked out and for the speed in which my GP had me in to see the specialist.

I think men are particularly poor at this. We put up with things. All too many do that and then find out their problems have multiplied.

When I started writing about this in the Chronicle I truly believed that if it helped one person on the cancer journey it would be worthwhile.

Well, it seems, my numbers might be slightly out.

The Christie press office are delighted by the response articles have had — they have linked through to the pages on the Chronicle website.

Dr Lee’s team said they had been amazed by the number of patients who came in clutching copies of the Chronicle.

Well good luck to you all. Our paths will be different and not all will have happy outcomes but if me and my mate the mask have helped ease some of the fears then great.

I have been overwhelmed by the messages of support from work colleagues, friends, the business community of Oldham and strangers alike.

It is that positivity that I believe helped keep me remain so upbeat.

For now, Councillor Alexander and myself are going to meet up for a beer and a natter. Best results of our lives, big man!