Not bad for a ginger kid! 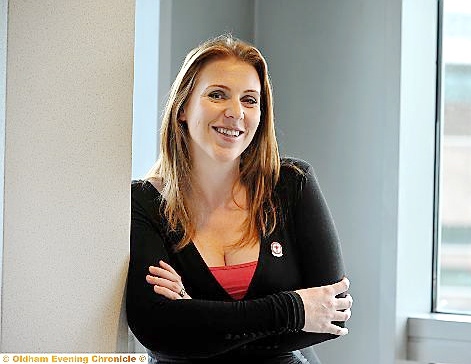 EIGHTEEN years ago, when Angela Rayner was a 16-year-old single parent living on a estate in Stockport, she had no vision of the future that featured her possibly entering Parliament by the time she was 35.

“I would probably have said ‘What’s Parliament?’” she told me with the candour that typified our chat about her journey from failing secondary school to the seat of Government. The move is a prospect that doesn’t faze her at all.

I met Angela at her office in the Arena Point complex of the Manchester Arena. She won the nomination to fight the Failsworth seat - currently held by David Heyes, who is standing down - at the General Election in May.

To say she has overcome adversity to reach her present level — she is convenor of the largest Unison branch in the country with 200,000 members - is to understate her achievements.

Married and with two brothers for her 17-year-old son Ryan, Angela relishes the future with enthusiasm and eagerness.

Failsworth — which is bracketed with Ashton and Droylsden as a parliamentary constituency — has chosen a woman who has already challenged her world for the betterment of her union colleagues.

David Heyes has been a hugely popular representative and commands a 9,000-plus majority, but Angela is taking nothing for granted and realises she faces a fight if she is take the seat.

She didn’t exactly mouth the words “Bring it on” but I suspect here is a woman who will relish the fight and wouldn’t have it any other way.

“My mother hardly went to school and can’t read nor write, and my father hardly ever worked due to health issues, so there was precious little money and certainly no reading material in our house when I was growing up.”

She left the failing Avondale Secondary Modern with seven low-grade GCSEs: “School wasn’t about education, but about larking around with my pals,” she admitted,

Despite the uncompromising start, Angela has risen to become one of the most powerful union officials in the country, sitting on Unison’s national executive and used to making big decisions.

From poor beginnings as a 16-year-old single parent, she has forged a life for herself, her son Ryan and her new family, six-year-old Jimmy and five-year-old Charlie.

Her husband Mark is also a trade union officer and completely supportive of his wife’s political ambitions. If elected, the family will move into the constituency.

Her journey to the door of the Establishment at the Palace of Westminster, began unpromisingly.

Persuading her grandmother to look after baby Ryan, Angela took an evening job at a care home so she could be more independent.

“All my life I had been picked on. I was the ‘ginger one’. You either survive or you don’t. There weren’t too many life chances for people like me, but I was going to survive.”

Years later, hen Stockport Council touted the idea of privatising the care service, Angela was “a little vocal” at the meeting and persuaded by colleagues to lead the fight.

She joined Unison and a day later was elected shop steward. “I was always asking why, and I think that’s why I was asked to be the union rep,” he admits.

In the early days Angela she was often viewed as a trophy for the local branch; a national union of great importance with a youngster in her late teens in the hierarchy. But Angela was never there just to make up the numbers.

To say she has never looked back isn’t exactly true, but her background and lack of privilege are what define her - and why she is so precious about her current status.

Those early days fighting for her care-home colleagues shaped her into the formidable woman she is today. As she rose through the Unison ranks her horizons broadened.

She was now a member of the Unison National Executive. By her mid-20s, Angela was assistant branch secretary, helping to look after the interests of 4,500 members at a time of great change.

“I was on a steep learning curve and I was swamped. But I felt I was needed and for a ginger kid that was what I wanted. I loved it!” she says.

In 2006 she joined the Labour Party and by 2007 was heavily involved. She never stood as a councillor because she was employed by the council.

“I didn’t wake up one morning wanting to be an MP; it was a gradual process,” he explains.

Angela sought the Withington seat nomination but was unsuccessful and was one of 17 seeking the Failsworth seat. Six made it to a shortlist.

“Being an MP, if I am elected, will be the ultimate public service. If I have ever achieved anything in my life then it is because I have achieved it for others.

“If I am elected, I will be measured by what I achieve for my constituents - not if become a minister or become Prime Minister, otherwise it will be hollow.”

For a ginger kid to have that ambition, even subconsciously, speaks volumes.