You are Here: Home » News » Mossley fired up for FA Cup test 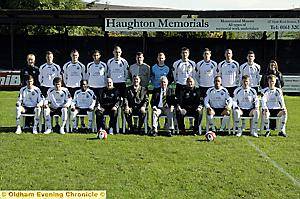 MOSSLEY will be within 90 minutes of a place in the first round of the FA Cup should they win at Tameside neighbours Curzon Ashton in the third-qualifying round tomorrow.

Mossley have already come through ties against Ramsbottom United, Flixton and Kendal Town, having entered in the preliminary round in August.

After being eliminated from the FA Cup at the first hurdle for the last two seasons, these are heady days for the Seel Park side which last reached the first round proper 25 years ago when they lost 1-0 to Huddersfield Town.

Manager Chris Willcock, who saw his side battle back from 2-0 down to earn a league draw against Bamber Bridge on Tuesday, said: “I am sure we can take the confidence, belief, spirit and character we showed in midweek into the cup-tie.

“It is a great tie in terms of local interest and there is a big carrot for the winner.

“If we show the same determination that we did on Tuesday, we won’t be too far away as we have some very talented players.”

Willcock ought to have a reinforced defence as captain Graham Kay, Simon Wood and Leon Henry, who missed the Bridge game through injury, are all expected to return.

He added: “It gives me a headache after the performance against Bamber Bridge when the players who came into the side did themselves proud.

“All the players are desperate to play in the FA Cup and it gives me a nice problem.”

Danny Self, who made his debut on Tuesday, is ineligible after playing for FC United in the FA Cup this season.

In the absence of Self, Scott Holt or Dave Hanlon will play on the right side of midfield.