You are Here: Home » News » Three off in Mossley cup nightmare

Three off in Mossley cup nightmare 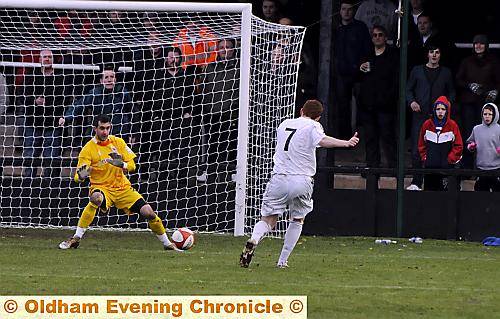 RAY OF HOPE . . . Steve Settle scores for Mossley to reduce the Lilywhites’ arrears to 3-2.

NON-LEAGUE FOOTBALL: MOSSLEY’S FA Cup dreams were shattered when they went down to a 6-2 home defeat at the hands of Darlington in the fourth qualifying round – and had three men sent off.

Goalkeeper Peter Collinge and midfielders Steve Settle and Chris Rowney saw red for the Lilywhites, who put in a courageous shift despite the numerical disadvantage.

The turning point came after 25 minutes when Andy Watson made a mess of clearing the ball which let in Chris Senior, who was felled by Collinge in the penalty area.

The goalkeeper was given his marching orders and, with no replacement on the substitutes’ bench, full-back Ben Richdardson went between the sticks. Tommy Wright converted the spot-kick.

Mark Bridge-Wilkinson doubled the lead seven minutes later with a long-range drive before Mike Oates brought Seel Park back to life with a confident finish after 39 minutes.

Just after the break, the hosts failed to clear their lines and Senior restored the two-goal cushion, only for Settle to fire home six minutes later for Mossley.

Kevin Austin pounced after an hour to put Darlington in the driving seat, and four minutes later Rowney was dismissed for a late challenge on Michael Brough and Settle received a second booking in the resultant brawl, despite his attempts to keep the peace.

Lilywhites boss Shaun Higgins said: “Twenty-five minutes into the game your game plan goes out of the window, and with 30 minutes remaining it is dead and buried.

"We lost the game because of bad decision-making, not because Darlington are better footballers.”