You are Here: Home » News » Main News » So inspiring - another MP Community Summer School draws to a close

So inspiring - another MP Community Summer School draws to a close 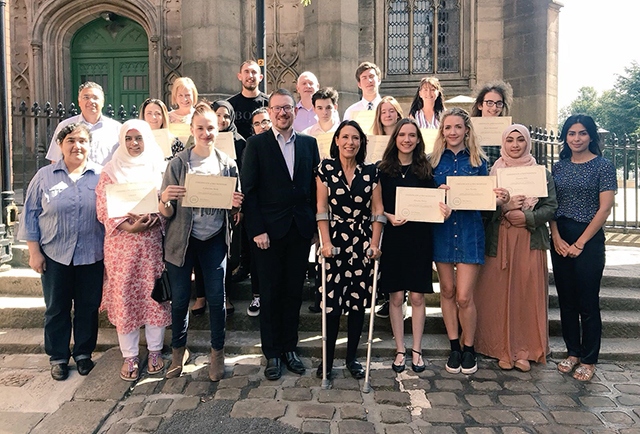 Andrew Gwynne, MP for Denton and Reddish and Shadow Secretary of State for Communities and Local Government, was the guest speaker at the graduation ceremony for Oldham MP Debbie Abrahams' Working for your Community Summer School 2018.

After the closing ceremony of her fifth annual summer school, Mrs Abrahams, who is MP for Oldham East and Saddleworth, said: “It’s always so inspiring to see the change in the participants as they make new friendships amongst each other and the confidence they gain after learning how they can make a difference in their communities.

“I’d like to say a big thank you to the many local organisations who’ve hosted the participants this year and given them such valuable hands-on experience of working in the community and helped bring the theory to life.”

Mr Gwynne, who awarded the participants with their graduation certificates, said: “It was great to meet so many young people who want to get into community work to make the world they live in a better place.

“By taking part in Debbie’s summer school they've made the first step and I’m sure they’ll go on to achieve great things and become tomorrow’s leaders.”

Oldham Sixth Form College student Omairia Bibi, from Glodwick, who did a placement with Positive Steps in the second week of the summer school, said: “I really enjoyed taking part in the summer school.

“The first week was really good as we learned the theory behind community work and we got to see behind the scenes at Parliament and how an MP’s office works.

“The second week was really practical and it was useful to see how an organisation like Postive Steps operates.

“It’s a great feeling to think that you can help make such a difference to people’s lives and the summer school has really helped me understand the importance of working in your community especially as I’m considering a career in politics."

During the first week of the summer school Omairia went with the other participants to visit Parliament where they met MPs and their staff.

The visit was a defining moment for Omairia, who explained why.

She said: “Meeting the MP Marsha De Cordova really inspired me because, being a muslim woman who wears a headscarf, I very rarely see other ethnic minority women in leading political roles.

"The question and answer session with Marsha, who is the Shadow Minister for Disabilities and has a sight impairment, was really inspiring and made me realise that it is possible for me to have a career in politics.”

Another participant, Catherine Stott, from Greenfield, also found the summer school to be useful ahead of her wish to study history and politics at university.

Catherine said: “The summer school gave me a good insight into the world of community work and it's relationship with politics and I’d highly recommend it to anyone, whether you just want to learn more about your community or are just interested in this type of career.

“The opportunity to meet influential politicians, like Andy Burnham, and get a placement with community organisations, as I did with Action Together, was a really valuable experience for me.”