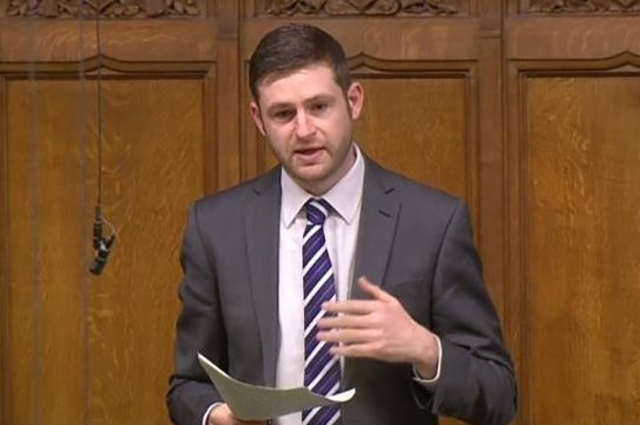 At Prime Minister’s Questions today (Wednesday), Oldham West and Royton MP Jim McMahon asked Prime Minister Theresa May why her Government have become so relaxed about the issue of Modern Day Slavery.

They have been slow to respond to damning criticism of their approach, and even slower to recruit a new Slavery Commissioner – a post still vacant five months after the previous post holder resigned.

This critical post has now been vacant for five times longer than victims receive statutory support.

The fact that it has taken so long to recruit a lead for tackling Modern Day Slavery only underlines the fact that the Government have seemingly run out of steam on the issue.

The National Audit Office have been highly critical of the Government’s approach, saying they lacks clear activities, as well as the mechanisms for monitoring progress.

The Home Office has lost tabs on how much is being spent on tackling modern slavery across the government, and how effective expenditure is.

Crucially, there have been few prosecutions under the Modern Slavery Act, and to date the maximum sentence of four years has fallen short of the one set by the Act.

The introduction of overly restrictive immigration policies could increase the vulnerability of migrant workers to exploitation.

This has been exemplified in the case of Overseas Domestic Workers.

Coupled with a labour market skewed towards de-regulation and flexibility, which almost always leads to an erosion of workers’ rights, there is a real fear that efforts to tackle modern slavery will be undermined.

It is vital to ensure that the rights workers enjoy today are not lost once Britain exits the EU.

This should be the very basis of dealing with modern slavery.

Other key rights for workers, such as freedom to join a trade union and to whistleblow, would help ensure an environment where modern slavery can’t thrive.

Mr McMahon said: “Organisations like the Co-operative Group are leading the way on the ground, offering paid work placements to help victims rebuild their lives.

“But the Government have clearly ran out of steam on the issue.

"They have been typically slow to appoint a new Slavery Commissioner, a post still vacant five months after the resignation of the previous post holder was tendered.

“Meanwhile, victims of modern day slavery, like Ján – who in his fifties lived in an attic in my home town of Oldham for six years while being forced to work in a factory without pay by his gang master – continue to fall victim to the scourge.”