You are Here: Home » News » Main News » Sam's big run in aid of a cause so close to his heart 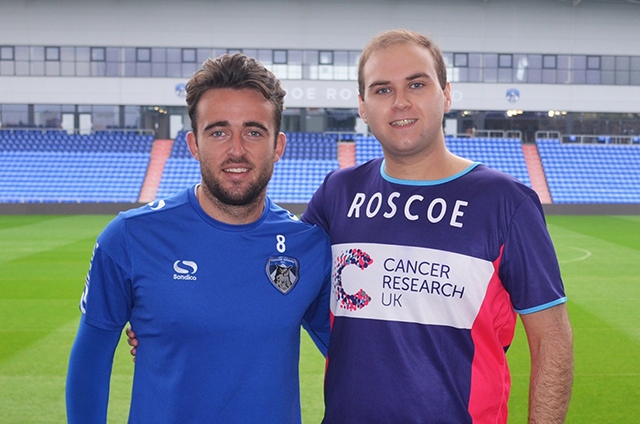 On Sunday (October 14) thousands of runners will be pounding the streets of Manchester at the annual Half Marathon, and one of those making their way around the city centre streets will be Oldham Athletic’s Head of Media and Communications, Sam Rosbottom.

Sam, aged 24, is running the 21 kilometres to raise funds for Cancer Research, a cause close to his heart.

“I have experienced first hand the heartache and pain of this horrible disease when I lost my Mum to it almost five years ago," Sam said.

“You don’t realise how much of an influence someone is in your life until you lose them, but I know how much she’d be willing me on to help raise money to help fund research that is having such a positive impact.”

One in two people in the UK born after 1960 will be diagnosed with some form of cancer during their lifetime.

Sam has set himself a target to raise £500 and so far the donations have been coming in from family, friends and colleagues, including Athletic players.

Attacking ace Jose Baxter has also set the media man a challenge that could raise even more money if successful.

Sam added: “Jose was the first to donate to the charity when I told the lads what I was doing.

“He is also going to be donating a further £5 for every kilometre if I finish the half marathon in under two hours and 15 minutes, which isn’t going to be easy but I’ve really got to go for it.

“Despite what people think about footballers they are very humble and generous people and it’s great that they are helping to raise as much as possible for Cancer Research.”

Every four minutes someone in the UK dies from cancer, but survival rates are improving and have doubled in the last 40 years in the UK thanks to research.

Raising money for the charity is Sam’s main priority but he admits that it would be even sweeter if he could complete Baxter’s challenge despite a distraction during his training.

Sam said: “I was doing really well with my training but then the World Cup came around and with England doing so well, it was difficult not to indulge and embrace the moment with friends.

“Working at the football club it can be difficult to find time to get out and go for a run, especially when there are away trips during the week.

“I’ve got back on track and training has been good.

To donate and help raise funds for Cancer Research, log on to: https://fundraise.cancerresearchuk.org/page/roscoes-half-marathon-2018