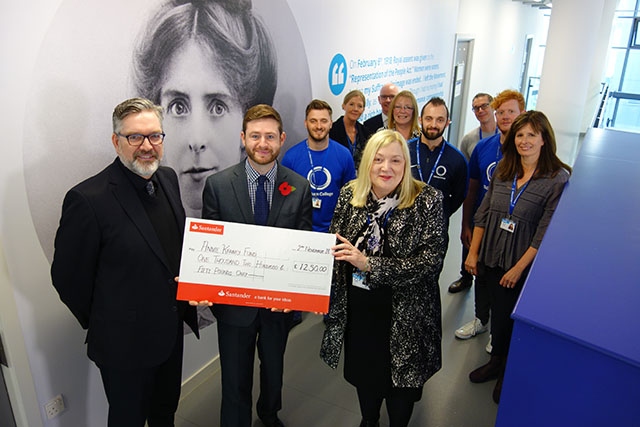 Oldham College students and staff hand over a £1,250 cheque to MP Jim McMahon

Superfit staff from the Oldham College raised a whopping £1,250 for the Annie Kenney Project as they took part in the Rochdale 10K and half marathon event.

A multitude of sponsors and staff contributions lifted the total raised to well over £1,000, before a cheque was handed over to Oldham West and Royton MP Jim McMahon.

Alun Francis, from the College, said: "The contribution from Oldham College means that the appeal has nearly met its (£31,000) target.

“If staff at other public organisations could do the same thing, then the target would be met very quickly.

"It's such a great cause that we would encourage others to follow suit.

"It was a lot of fun raising the money, as well as being in aid of a good cause."

"Thanks to all our sponsors for contributing."

Annie Kenney was a leading member of the suffragette movement.

She came from Oldham and had working class origins.

The Annie Kenney Project aims to raise, by public subscription, the funding to erect a statue in her honour outside Oldham's historic Town Hall, in Parliament Square.

Sculptor Denise Dutton has been commissioned to create the statue, which is due to be unveiled in mid-December.