You are Here: Home » News » Main News » Francis really is a Star apprentice

Francis really is a Star apprentice 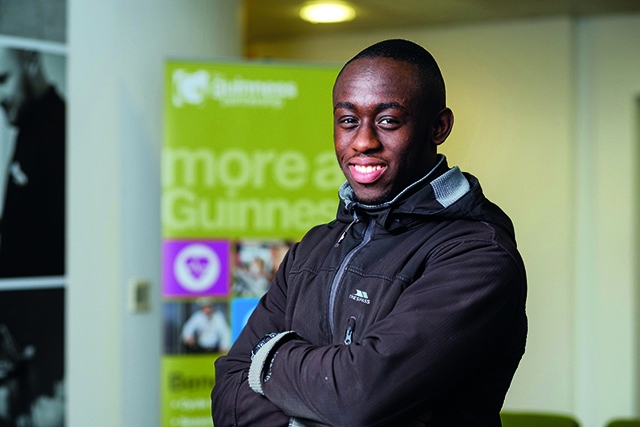 A trainee electrician from Oldham has won ‘Apprentice of the Year' in The Guinness Partnership's Star Awards.

Apprentice electrician Francis Ngawoofah beat stiff competition from across the country to take the title and win the national award.

The Star Awards receive hundreds of nominees every year and recognise the achievements of employees working for Guinness, one of the largest housing associations in the country.

The Apprentice of the Year award is presented to an apprentice who has shown great potential and a desire to develop their skills and knowledge to get into their chosen career.

Guinness was looking for an apprentice who exceeds their targets, is enthusiastic about their work and takes responsibility for their development.

Francis is in the first year of his electrical apprenticeship with Guinness Property.

As part of the apprenticeship he is studying at Hopwood Hall College in Middleton, where he has quickly progressed.

He has passed all his exams in a short period of time, and is well on course to achieving his first year's targets.

Francis has already worked on a number of projects across Guinness, assisting with the rewiring of properties and heating upgrades.

When electricians, supervisors and managers are looking for an apprentice to assist on their contract, Francis is always the first person that they ask for.

On receiving the award, Francis said: “I love my job and am absolutely thrilled to have received this award.

"I am lucky that I have got such a great team around me and am looking forward to progressing to the next stage of my career.”

"All his colleagues say that he is a joy to work with, and that he carries out his work to a very high standard.

"He is always eager to learn and continuously looks for opportunities to develop his skills.

"He also delivers on the basics - organised, punctual, warm and friendly, which, along with taking the development of his chosen career very seriously, will lead to further success.”