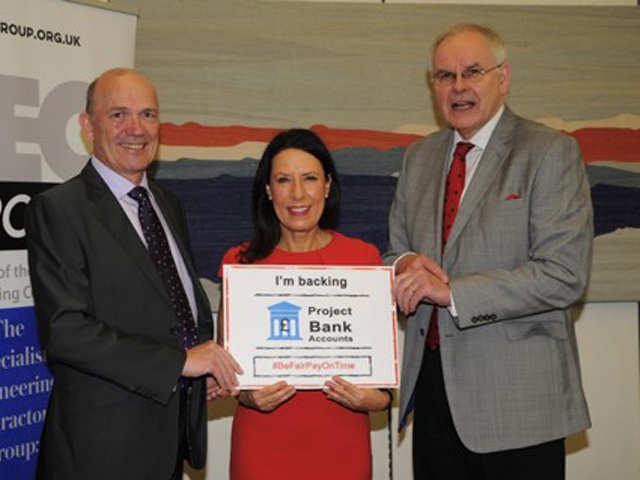 Payments on government and public authority contracts should be made through a “project bank account” system, according to an Oldham MP.

That’s a ring-fenced account that will ensure small businesses don’t suffer if a giant that’s involved in the project were to collapse.

MP for Oldham East and Saddleworth, Debbie Abrahams, has proposed a ten-minute rule bill calling for government payments to be made through this system.

Abrahams, created the award-winning ‘Be Fair - Pay on Time’ campaign in 2012, and proposed a bill to help ensure small businesses are paid directly and promptly.

It was also designed to protect them against losses, such as those created by the collapse of the construction giant Carillion one year ago.

She also set up and chaired a late payments inquiry in Parliament in 2013.

She said of the bill: “My bill aims to set in law the requirement that all parties delivering government and public authority work, from the lead contractor right down through the supply chain, will receive payment from the same secure ‘pot’ of money.

“Late payment by large businesses is a massive issue across all business sectors leading to billions of pounds being owed to smaller companies for work that has been done.

“When payments take a long time working their way along a supply chain from the contracting authority there is a risk that the cash could be cut-off at any time because of payer insolvency.

“We witnessed the catastrophic effect this has with the collapse of Carillion, a year ago to the day, with £2bn of unpaid invoices to their smaller suppliers.

“The precarious position of other major Government contractors like Interserve means urgent action is required.

“That’s why my ten-minute rule bill will require all government and public authority work be paid to suppliers using project bank accounts.”

In her speech Debbie raised the case of an Oldham based company, Johnson Bros Ltd, who lost £176K, net of VAT, on unpaid invoices to Carillion after the construction giant collapsed.

Owner of Johnson Brothers, Neil Skinner, who was in Parliament to watch Debbie’s speech, said: “A few years ago Carillion were reasonably okay at paying our invoices, but even this was based on the fact that we could threaten to stop working in the middle of a job if we didn’t get paid for the work we had done up to that point.

“They paid us under these circumstances but only because they knew any delay would look bad for their performance index.

“Even so, payments still often went over 60 days, with a lot of chasing, and once the job for a particular customer was finished our sanction, to stop working, was gone and their payments just stopped.

“Carillion finally resorted to using all the familiar late payment tactics from finding fault with an invoice, referral to their accounts office in India, statement queries, disputed invoices paid, and so on.

“Then, lastly, they imposed a 15 per cent non-negotiable discount on our work or they would send all unpaid invoices back to their quantity surveyor’s department.

“We reluctantly signed this contract and they went ‘bump’ the Monday after signing and five days before the first part payment was due.

“As a result of Carillion’s late payment tactics small enterprises like mine have been suffering greatly, if not terminally.

“Large companies know late payment can destroy us small businesses, but they rely on this tactic to ‘cook the books’ and be seen to be profitable themselves.

“Carillion went under owing us well over 15 per cent of our average turnover and, following a difficult year last year, this money is much needed to help us survive.”

Sean Fielding, Oldham Council’s Labour Leader, said: “At Oldham Council we work hard to ensure payments, wherever possible, are prompt in order to help businesses and the supply chain which we know are the lifeblood of our local economy.

“Anything that can be done to support firms like this has to be welcomed.

“The collapse of Carillion has again highlighted the misery that late and irregular payments can cause for so many businesses and their staff – and that also has a knock-on effect on the wider economy.

“I fully support this call for project bank accounts and hope it will secure cross party support.”

Rudi Klein, Chief Executive of Specialist Engineering Contractors’ (SEC) Group, which represents the interests of the specialist contractors across the UK, is a leading late payments campaigner and advocate of project bank accounts.

Klein said: “Given the precarious financial state of many of the UK’s major contractors Debbie Abrahams’ bill is now extremely timely.

“In fact it would now be very neglectful of Parliament or the Government to continue to ignore the concerns of SMEs in construction supply chains which have had to put up with payment abuse over many years.

“Project bank accounts are now acknowledged to be the most effective method of ensuring secure and regular cash flow.”