You are Here: Home » News » Main News » Blood transfusions now possible at the roadside with the Air Ambulance

Blood transfusions now possible at the roadside with the Air Ambulance 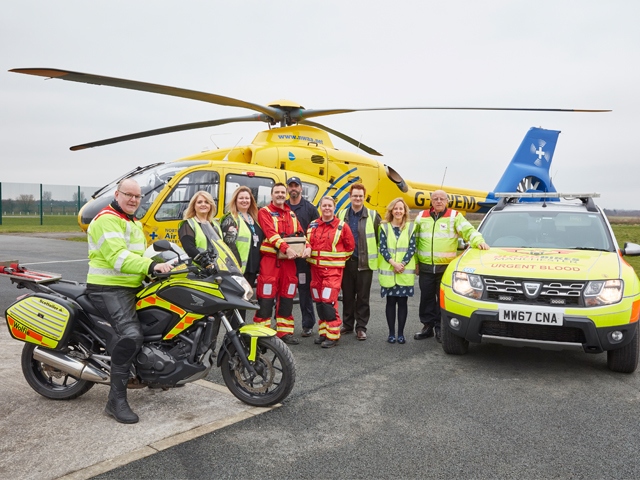 Paramedics working with the North West Air Ambulance can now perform blood transfusions at the roadside for the first time.

It’s after the charity has introduced measures to carry blood on board its helicopters – in collaboration with Blood Bikes Manchester and the Salford Royal NHS Foundation Trust.

It’s been funded by the Henry Surtees Foundation, a charity supporting those with physical injuries caused by accidents.

Air Ambulance paramedics and consultants have undergone comprehensive training to administer blood in the field, led by Salford Royal, further extending the service’s capability to bring the skills and life-saving procedures of an emergency department to the scene of injuries.

With the charity flying out to over 2,000 missions each year, many being major trauma incidents, the charity estimates two to three urgent transfusions will be required each week in the North West.

Of those, patients with major trauma who are attended to at the roadside by enhanced care teams then have a greater chance of survival.

The project brings together three vital local services for the first time, two of which are charity-funded. Packed red blood cells and pre-thawed plasma will be supplied by Salford Royal and delivered by Blood Bikes Manchester, an entirely volunteer-run operation, in temperature-controlled boxes to the NWAA Barton base each day.

Any blood not used that day by the air ambulance will be safely returned by Blood Bikes riders for use in the hospital, to ensure precious donations do not go to waste.

Celebrating the medical collaboration of three local services, Clint Jones, Consultant Anaesthetist at the North West Air Ambulance Charity, commented: “This is the first time the entire North West will have access to this life-saving in-the-field medical procedure.

“It is a proud moment for our charity, and our partners at Blood Bikes Manchester, the Salford Royal and the Henry Surtees Foundation.

“As a charity that relies completely on public and corporate donations to keep flying, the support and collaboration to make this project possible – from fellow charitable organisations – has been incredible.

“Our priority is to deliver emergency care from the air, bringing pre-hospital interventions to seriously ill and injured people no matter their location.

“Our crew are often called to treat patients suffering from major blood loss or internal bleeding, so the need for this on-the-scene intervention was clear; being able to administer blood there and then will give people precious time in the race to safely treat and transport them to hospital.”

Steve Deakin, Duty Manager at Blood Bikes Manchester, celebrated the collaboration behind the initiative: “Blood on board is an essential public service, and we are proud to work side-by-side the North West Air Ambulance Charity and Salford Royal to bring the project to life.

“Our team of volunteers understand just how important it is to get blood to patients quickly.

“Traditionally, we’ve focused on the swift transport of donations and samples to hospital, and it is an honour to now be working to bring blood and plasma to patients wherever they may need it.”

Deborah Seddon, Haematology and Blood Transfusion Service Manager at Salford Royal NHS Foundation Trust, said: “Blood loss is a major factor in the survival of trauma patients, and anything that can be done to combat its detrimental effect could undoubtedly save lives.

“Our purpose is to deliver safe, effective treatment to patients across Salford, so we are incredibly proud to support the North West Air Ambulance Charity in delivering this service to people across the North West.”

Clint added: “After much preparation and planning, it is rewarding to launch the service onboard for the first time.

“Our thanks go to the Henry Surtees Foundation for their incredibly generous funding, and our partners at Blood Bikes Manchester, the North West Ambulance Service and Salford Royal for making blood on board possible.”