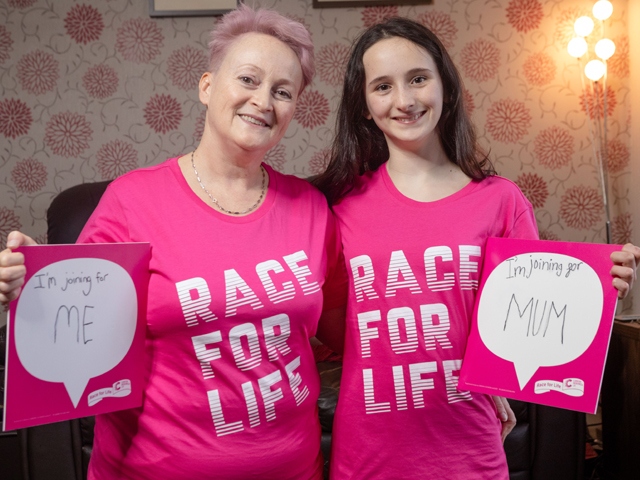 Andrea and her daughter Emily.

An Oldham cancer survivor is pledging to take part in Cancer Research UK’s Race for Life in June alongside her daughter and is inviting everyone to join them.

Breast cancer survivor Andrea Hawker, 46, and her daughter Emily,12, stand proudly with signs declaring their personal motivations for taking part in the Race for Life event at Alexandra Park, Oldham on Sunday 23 June.

This year, for the first time, Cancer Research UK is inviting everyone, women, men and children to join the Race for Life.

Andrea, from Waterhead, Oldham, said, “I’m so proud to join this year’s Race for Life alongside my daughter and friends.”

Andrea was diagnosed with breast cancer in November 2017, after spotting a change in her left breast. Further tests showed she had a tumour measuring over 7cm.

She said, “I noticed a change in my breast, not a lump but it felt totally different to the other one, so I popped to GP not thinking it would be anything serious. I was sent to the Royal Oldham Hospital, Victoria Centre Breast Care Unit about two weeks later. I still didn’t think it was anything serious when I went along but they were able to tell me on the day that it was cancer. I had an examination, two mammograms, several biopsies and then had to go back at tea time to have the news confirmed. I’d been so convinced I’d be all-clear so I was shocked! I just sat there for a while, then later it sinks in and I was devastated. I’d gone there by myself feeling 100% sure I’d be okay, so they rang my partner, Rick, to collect me.”

After my initial diagnosis my treatment plan changed a bit because we discovered the cancer had spread to some of my lymph nodes and they were worried it could spread elsewhere. Originally, I was going to have chemotherapy and then surgery but then they decided I’d need surgery first and then chemotherapy.”

Andrea had her surgery, a full mastectomy, in January 2018 at North Manchester General Hospital and was able to come home the same day. A nurse then came to her house every day to empty her drain and once the drain was removed a week later she was able to venture outside.

During her recovery Andrea’s partner, Rick, her parents, family and friends all helped by picking Emily up from school, cooking Andrea meals as she was in too much pain to lift saucepans in the kitchen and going to the supermarket until about four weeks after her operation. Then she began her chemotherapy at Royal Oldham Hospital, Victoria Centre Breast Care Unit which lasted until summer 2018.

Andrea said, “Although I was very scared, having chemotherapy wasn’t as bad as I’d thought it was going to be but for me it did feel like I had a permanent hangover and I was very tired. I needed a lot of sleep.”

Andrea then had 15 sessions of radiotherapy every day except at weekends. During her treatment she lost all her hair, her eye brows and eye lashes.

She said,“I got a wig but to be honest I hardly wore it as it was such a hot summer, so you’d usually find me in a cap and sunglasses or without anything – it didn’t bother me! I just thought “stuff it!”
“I was more concerned about my eye brows and eye lashes. My hair came back pretty quickly but my eye lashes and eye brows took a long time to grow back. Now that my hair has come back I’ve decided to dye it pink. I wanted to do something a bit different and wacky!”

Andrea, who is beginning a phased return to work at British Gas, is now on hormone therapy for 10 years and has annual check-ups with her oncologist.

Last summer Andrea, her friends and her daughter all took part in Oldham’s Race for Life and Andrea will be back on the start-line this year and is hoping more people in Oldham will join her. 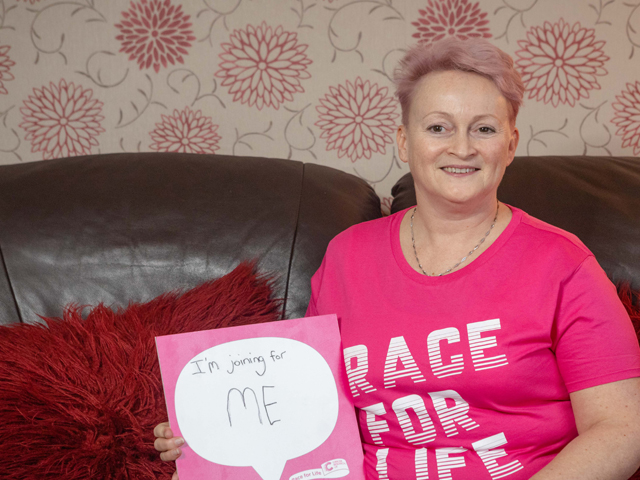 She said, “It was a really hot day last year and I’d just finished my chemotherapy, so I walked round at a nice slow pace with my friend and sister-in-law and my daughter went around with her Guides group and met me at the end. The rest of my family went to watch. It was really great to take part – no matter how slow I was – and fantastic to see how many people were there to support people affected by cancer. It was very emotional to read some of the back signs and see some of the photos on them. It really hits home how many people are affected by cancer.
My experience means I understand all too clearly why Cancer Research UK’s work is so important. I believe it’s thanks to research that I’m standing here today and can enjoy more special moments with my family and friends. I’m so excited to take part in Race for Life and join such a formidable force of supporters who are so motivated to make a difference.”

Cancer Research UK’s Race for Life, in partnership with Tesco, is an inspiring series of 5k, 10k, Pretty Muddy and Pretty Muddy Kids events which raise millions of pounds every year to help beat cancer by funding crucial research.

Kirsti Thompson, Cancer Research UK’s Oldham Event Manager, said, “We are very grateful to Andrea and Emily for their support. By following Andrea and Emily’s lead, and joining the Race for Life in Oldham, people can make a real difference in the fight against cancer. Our Race for Life events are fun, colourful, emotional and uplifting. You don’t need to be sporty to take part. You don’t have to train, and you certainly don’t need to compete against anyone else.”

One in two people in the UK will be diagnosed with cancer, at some point during their lifetime, but the good news is more people are surviving the disease now than ever before. Cancer survival in the UK has doubled since the early 1970s and Cancer Research UK’s work has been at the heart of that progress.

Kirsti continued, “Every day,110 people are diagnosed with cancer in the North West. To make a significant difference in the fight against cancer we need to harness as much energy and commitment as possible, and that’s why we need everyone in Oldham to join. We’re urging mums, dads, nans, grandpas, brothers, sisters, friends and workmates to show their support by joining the Race for Life. It’s a perfect example of everyday people doing an extraordinary thing – uniting in a common cause to beat cancer.

We encourage our participants to help raise money in what every way they like there are lots of ideas on the Race for Life website because this allows Cancer Research UK to fund vital research that saves lives.
This includes clinical trials which give patients in Oldham access to the latest treatments.”