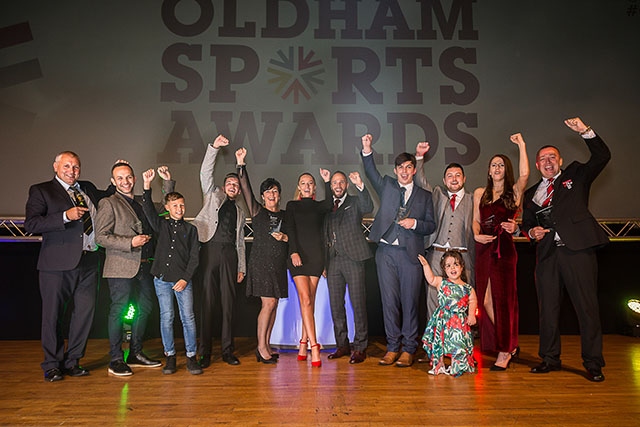 Well done to all the Oldham Sports Awards winners!

Back for its 17th year, Oldham’s Sport Awards 2019 kicked off with the opening for nominations in a number of categories including Club of the Year, Volunteer of the Year and Unsung Hero.

The great and the good of the borough’s sporting fraternity will gather at Queen Elizabeth Hall in Oldham Town Centre on Friday 21st September 2019.

Last year Andy Steel was the pride of Oldham at the Greater Manchester Awards, as he won the prestigious Volunteer of the Year award.

The categories in this year’s Oldham Sport Awards are:

This award is for a person who has used physical activity to transform their lifestyle for the better.

The nominee should be a permanent resident in the local area.

Club of the Year

This award is for a community club or community group who has had an impact in their local community in the past twelve months.

Young Sports Achiever of the Year

This award is for young athletes (aged under 18) who are not professionally funded who have had significant success in their sport throughout the year.

This award recognises long term volunteers (over 10 years) who have made a significant difference over that timeframe.

The volunteering must take place in the borough they are nominated for.

Volunteer of the Year

This award is for volunteers who have given up their time to volunteer over the given time frame.

The volunteering must take place in the borough they are nominated for.

This award recognises schools that have gone above and beyond in respect to incorporating activity into a school day for their pupils and staff.

It is based upon achievements in the academic year - Primary or secondary schools are eligible - School must be based in the borough.

This award recognises an individual that has used physical activity or sport within their professional role to have positive impacts on any of the following outcomes for their local community;

- GP sending patients to parkrun - Support worker upskilling themselves to promote Physical Activity.  - Researcher developing research that has enabled more people to get active.  - Individual from a workplace supporting getting their workplace more active.

Initiative of the Year

This award recognises a physical activity initiative by an organisation which has made a difference in communities and achieved positive social outcomes.

The activity must be based in the local authority.

Visit https://oldhamsportsawards.co.uk/events/nominations/ to get you nominations in now!