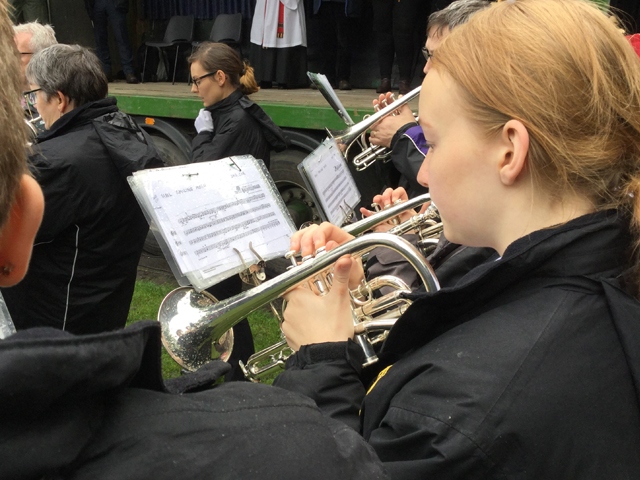 Hundreds turned out to watch bands from around the world

Hundreds turned out to march from their villages to  the inspiring united church service  in Uppermill accompanied by their own bands.

There was warm welcome and applause for longtime Whit Friday champions Rev Duncan Rhodes and his wife Nancy who attended the service. For years, Duncan headed up the congregation from Kiln Green, Diggle on their annual pilgrimage to the service.

And, as a counterpoint, nurse Julie  Bradley from Dobcross,  was reunited with her brother  Andy, aged 52, living in Malta, who returned to share  Whit Friday for the first time in 26 years.

“I’ve asked him lots of times to come over for Whit Friday but he’s not managed to make it until this time. He purposely planned it so he’d be here for today.”

And at Scouthead as part of local tradition, Derek Heffernan, a former  Mayor of Oldham, lead the first band to play in the Scouthead contest as the recently-appointed Mayor of Austerlands.

Elsewhere in Greenfield, St Mary’s and Greenfield Methodist took part in a join walk of witness around the village led by the Right Reverend Mark Davies, Bishop of Middleton.

In an inspirational address, Reverend Doctor Janet Wootton, President of the Congregational Federation, encouraged the giant congregation to share hands with each other  supported by clergy from the other churches who  their part in the uplifting event before the congregation returned to their respective villages.

In the afternoon and evening, the villages welcomed battalions of brass bands including visiting musicians from Canada and Iceland competing for prizes in the coveted brass band contests.

The bands played in twenty different locations with contests open to all-comers.

And last night as GMP Saddleworth and Lees announced their Policing Operation was coming to a close, there have been no arrests at Uppermill but one arrest at Delph for a domestic assault and one arrest for a drink drive offence at Lees.

No alcohol was seized at Uppermill from under eighteens and police added: “The young people that did come to the event were a credit to their community.”