You are Here: Home » News » Main News » Plans to be build homes on protected land in Oldham approved

Plans to be build homes on protected land in Oldham approved 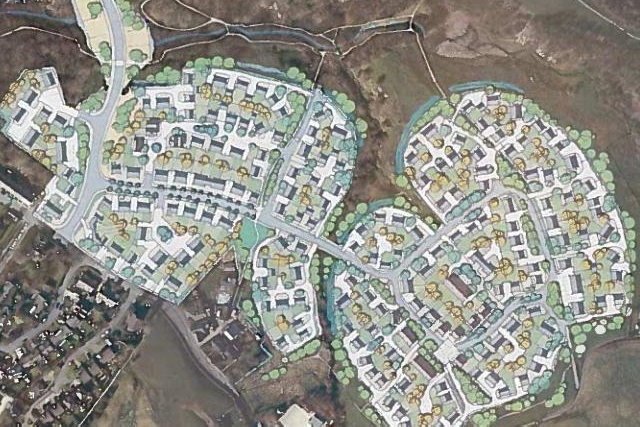 Controversial plans for 265 homes and a £3.5m link road will now be built on protected open land in Oldham despite opposition from thousands of residents.

The proposals had originally been rejected by the borough’s planning committee in November, but at a special meeting, members changed their decision, with a majority voting to approve.

The developers Russell Homes said the housing proposals and new road linking Knowls Lane and Ashbrook Road would help bring in £37m into the local economy in the long term.

The decision to grant approval was met with anger from the public gallery, with residents accusing the committee of riding roughshod over the community in Springhead, Grotton and Lees.

More than a hundred protestors had attended the meeting on Monday night carrying signs and placards bearing the slogan ‘save our valleys’.

As voting took place, an objector shouted that the committee was ‘playing with people’s lives’, and another added ‘shame on you’.

Confusion over the vote only served to inflame tensions in the council chamber which prompted shouts of ‘shambles’ and ‘amateurs’.

An appeal against refusal had been due to go to a public inquiry later this month, but head of planning Stephen Irvine told the meeting that they were very unlikely to win.

“You can’t use words to win public inquiries, I am very, very strongly saying that it is not going to go well,” he said.

“It is all very well going out there and saying ‘we will fight this’, but you can’t go out and fight if you have no weapons.”

Officers had recommended approval after they ruled the initial reasons for refusal over concerns about the loss of the open land no longer outweighed the council’s dwindling housing supply.

Half of the 15-hectare site was already allocated for housing, but the remainder was deemed ‘other protected open land’ (OPOL) – which the planning inspector ruled in 2011 was ‘imperative’ to be retained.

Officers said the harm to the landscape was outweighed by the scheme’s ‘significant benefits’.

But Sue Hodgkiss, speaking on behalf of ‘Save our Valleys’ objectors, said the development would pile pressure on local services, and would cause a ‘severe’ loss of wildlife.

“It would bring a potentially dangerous road to the area with more traffic and therefore damage to the environment and health,” she said.

“It would cause the loss of valuable green space, one of the few places in our community used for recreation and exercise.

“No amount of tree planting will prevent the harm that will be done.

“This development is not suited for this site. It would harm the community and change the characteristics of the villages of Lees, Springhead, and Grotton forever.”

Planning officer Graeme Moore said it was considered the harm to heritage assets would be limited, and harm to the landscape and loss of open land was ‘outweighed by the scheme’s public benefits’.

Mr Irvine told the chamber not enough homes are being built in Saddleworth and Lees, and the council could not demonstrate it could meet a five-year housing supply in the borough.

This meant that the ‘weight’ that was given to protecting the OPOL site, was less than the importance of getting new ‘sustainable development’.

“The community see a glorious green space and an area valued for generations, unfortunately developers just seen the pound signs,” he said.

“We as the elected should fight this with everything that we have. If not, why are we even here?”

Thomas Relph, the planning and land manager at Russell Homes, said there was ‘considerable demand’ for houses from first time buyers in the area.

The construction of the link road would meet a ‘long term aspiration’ of the council and address a ‘historic bottleneck’ and alleviate congestion, he added.

“There has been too little housing provided over the last decade in Saddleworth and Lees leaving a shortage of family and affordable housing,” Mr Relph said.

“Our scheme will deliver good quality housing to meet this need.”

The developer had guaranteed the nearby St Agnes Primary School with space to expand, and would provide 60 affordable homes

But Coun Garth Harkness said that the plans to build into the half of the site designated as protected were ‘greedy’.

And Coun John Hudson added: “Whether you call it OPOL or call it green belt or call it what you want – I say why aren’t you knocking these mills down and building on brownfield sites?”

But a majority of councillors voted to approve the application.