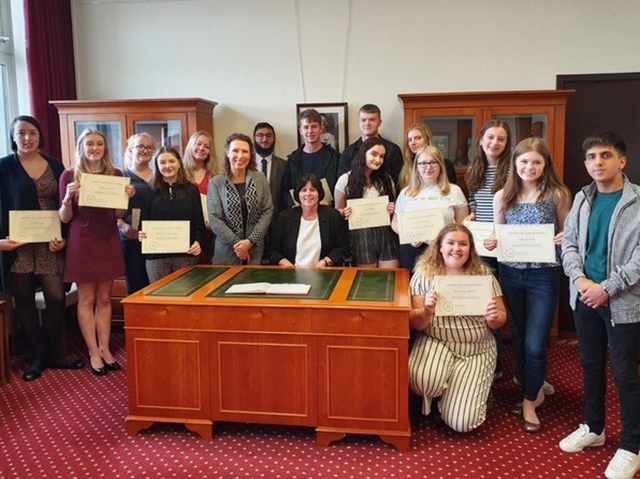 The Mayor of Oldham, Councillor Ginny Alexander, has awarded graduation certificates to the participants of MP Debbie Abrahams' sixth annual Working for your Community summer school 2019.

After the closing ceremony, Mrs Abrahams, who is MP for Oldham East and Saddleworth, said: “Each year my summer school gives me a boost from meeting such high calibre young people, who are so full of energy and enthusiasm, and so keen to broaden their experiences and learn about how they can make a difference in their own communities.

“It’s also wonderful to see the change in the students as they gain confidence and make new friends amongst the group, and the local organisations that host them.

“I’d like to say a big thank you to the many organisations who’ve hosted the students and given them such valuable hands-on experience of working in the community and helped bring the theory to life.”

“The first week was particularly interesting as we learned the theory behind community work and were able to see, first-hand, behind the scenes at Parliament, meeting John Bercow and other famous politicians, like Greater Manchester’s Mayor Andy Burnham."

Megan Birchall, from Sholver, said: “Debbie’s summer school has easily been the most engaging and informative program I’ve ever had the privilege to be a part of.

“It was incredibly informative, allowing us to see both national and local politics in practice from all angles, covering various elected officials alongside different forms of media.

“It’s been absolutely unforgettable and I’d encourage anyone to take part.”

And Freya Barrass, from Saddleworth, said: “It’s a great feeling to think that you can help make such a difference to people’s lives and Debbie’s summer school has really helped me understand the importance of working in your own community.”