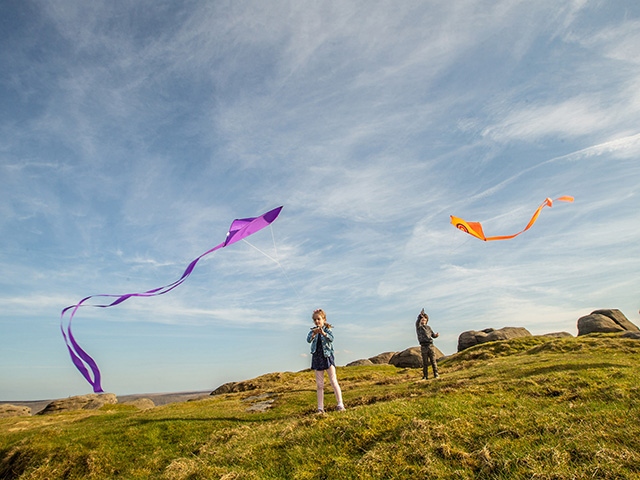 Children fly kites on a sunny day in the South Pennines. Pic courtesy of Craig Shaw.

Moves to create a South Pennines Park, which would include large parts of the Oldham District, have received a boost from the man charged with reviewing the nation’s designated landscapes.

He also accepted an invitation from rural regeneration agency Pennine Prospects to spend a day in the South Pennines  – the only upland landscape in England with no legal landscape designation.

During his visit in February he met with community groups, local businesses, utility organisations, students, campaigners and local authorities, who spoke with one voice on the need for greater recognition for this beautiful and distinctive area.

Now he has issued his interim findings in a letter to Secretary of State Michael Gove ahead of the report’s full publication later this year.

In it he states he wants to see a wider range of non-designated landscape protection encouraged, giving the South Pennines as an example.

He also describes the work being done in the region to establish a park as “impressive”.

Helen Noble, Chief Executive of Pennines Prospects, said: “Much of the interim report chimes with our thinking on looking at a new, innovative approach to managing our beautiful place and we are pleased to see that Julian Glover singled out the South Pennines to the Government.

"We have said all along that we do not want to become a traditional national park or AONB, but rather steer a path which puts people first and where conservation lies at the heart of sustainable development.

"That will allow us to tackle challenges like climate change and social inequality.

"It's about achieving the three “R”s – recognition, respect and ultimately resources.”

A National Lottery funded project is already underway to build the management capacity needed to realise the potential of a South Pennines Park and investigate how it could be funded.

The South Pennines covers 460 square miles of upland country, bounded by the Peak District and Yorkshire Dales national parks, plus two areas of outstanding natural beauty (AONBs): Nidderdale and the Forest of Bowland.

It is one of the UK’s most celebrated landscapes, embracing parts of Yorkshire, Lancashire and Greater Manchester, with a population of 450,000.