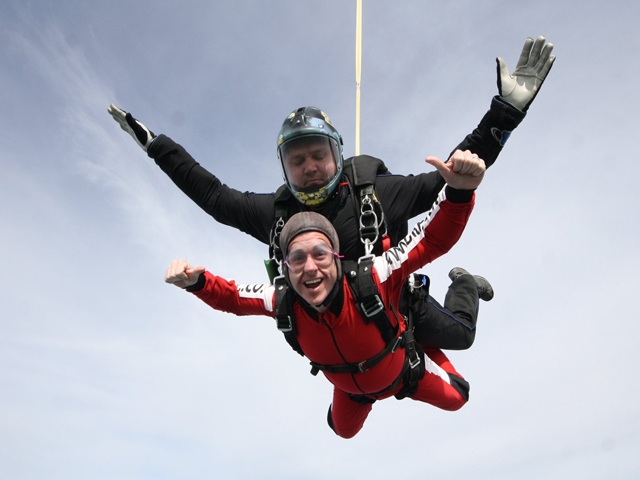 The sky’s the limit for a Middleton man, diagnosed with a malignant brain tumour. He completed a parachute jump at 15,000 feet, to raise money for the charity Brain Tumour Research.

Neil Taylor, a 34-year-old franchise supervisor at McDonald’s, was diagnosed with a grade 3 astrocytoma in February 2017, after suffering seizures in his sleep.

Recently married and looking forward to the birth of their first child, the news devastated the young couple but the diagnosis spurred them on to raise money to help fund the fight against brain tumours.

Alongside his wife Alex, 26, in November 2018 Neil launched the Fundraising Group Neil’s Appeal under the Brain Tumour Research umbrella.

The tandem skydive is the latest in a series of fundraising events and challenges Neil has taken on in recent months, having collectively raised over £15,000 to help fund a brain tumour cure.

The skydive took place on 3 August at the Black Knights Parachute Centre in Lancaster.  Neil was joined by ten fearless friends, relatives and colleagues for the daredevil challenge, which saw them reach speeds of around 120mph during their 15,000 feet freefall.

Their heroics have so far raised £2,500 for the charity, with more money still being donated. 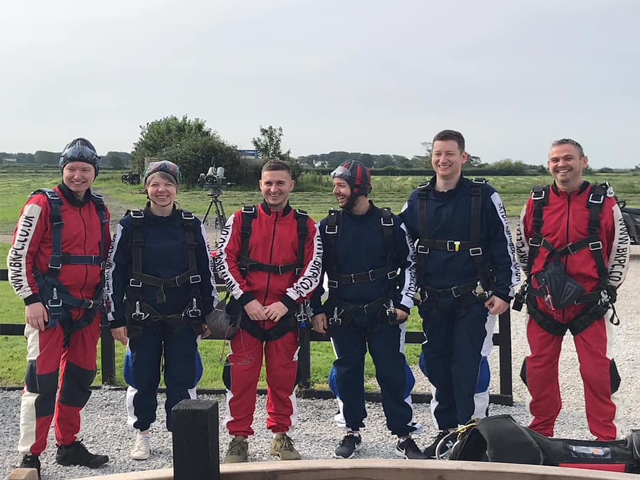 Neil said: “I never thought jumping out of a plane would be so much fun! I had to get the jump signed off by my oncologist but I’m delighted to have conquered something I’ve always wanted to do, while raising money for a cause close to my heart. I can’t thank everyone enough for their support; every donation, no matter how small, is really appreciated.

“Less than 20% of those diagnosed with a brain tumour survive beyond five years compared with an average of 50% across all cancers. I’m pleased to be able to do my bit to help address this disparity.”

Tagging themselves on social media as #TaylorsWarriors, the Fundraising Group has previously produced a naked calendar and held charity football tournaments, helping them to exceed their original target of raising £10,000.

Neil has undergone surgery, radiotherapy and chemotherapy. He had to give up his driving licence for two-and-a-half years but recently got it back after a quarterly scan revealed the tumour is stable. His scans have now been reduced to six-monthly and he continues to feel well.

He added: “The last couple of years have been up and down to say the least. Receiving the brain tumour diagnosis not long after getting married to Alex, who was pregnant with our daughter Annabelle, was shattering. Annabelle turns two later this month, which is obviously an important milestone in more ways than one.

“The treatment has been tough and there are no guarantees for the future but I am determined to continue fundraising for research into this disease, which is so critically underfunded.”

Brain Tumour Research funds sustainable research at four dedicated centres in the UK; it also campaigns for the Government and the larger cancer charities to invest more in research into brain tumours in order to speed up new treatments for patients and, ultimately, to find a cure.

Brain Tumour Research is calling for an annual spend of £35 million in order to improve survival rates and patient outcomes in line with other cancers such as breast cancer and leukaemia.

Matthew Price, Community Fundraising Manager for Brain Tumour Research in the North said, said: “Our sincere thanks go to Neil and all his supporters, who fundraise tirelessly for research into brain tumours. What Neil’s Appeal has achieved, in the years since Neil was diagnosed with a brain tumour, is phenomenal.”

“Their hard work is also helping us to raise awareness of the fact that historically, just 1% of the national spend on cancer research has been allocated to this devastating disease and, with the help of our Fundraising Groups and supporters, we are proud to be changing this.

To organise an event like this, while fighting this cruel disease himself, is really inspirational. It sounds like it’s going to be a fantastic event!”

To make a donation, go to www.justgiving.com/crowdfunding/neils-appeal-jump . To follow and support Neil’s Appeal, go to their Facebook page