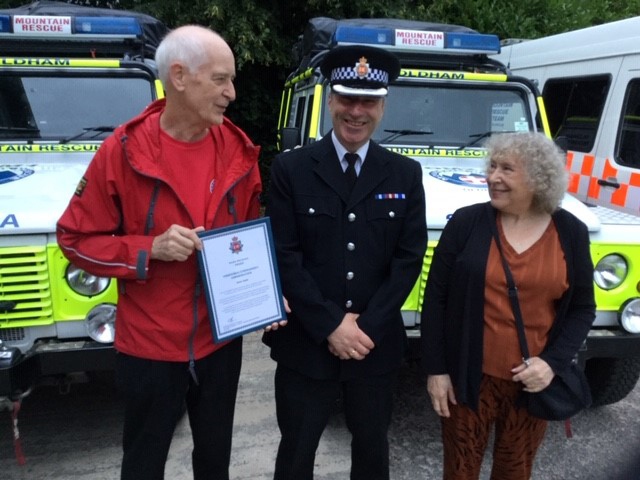 A  modest hero of the hills has received a unique honour from a top GMP police commander, for his “inspirational commitment” to the community.

The award citation from the chief said: “In presenting this commendation GMP acknowledge outstanding committed service that Peter has given, at both a local and  a regional level and congratulated  him on this achievement.

“His commitment to the communities in Oldham and beyond is inspirational.”

His wife, Jean,  said: “I’m delighted and so proud of Peter.” 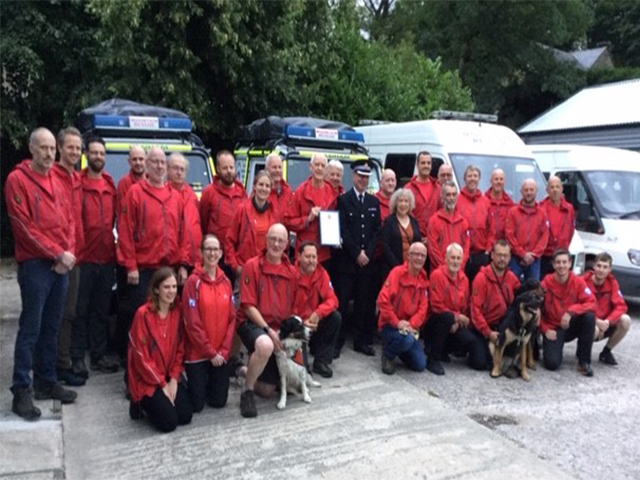 Peter who had just become an octogenarian, has been Team Leader, Treasurer, Deputy Leader, Chairman, Trustee, Director of OMRT.

Earlier in an interview to mark his 50 years he said : “I have had the pleasure of seeing the team develop over the years and feel proud to be associated with a group of people and friends who consistently put themselves second when there is someone in need.”

And it’s a double whammy for Peter as  the team have been honoured with The Queen’s Award for Voluntary Service, the highest award a voluntary group can receive in the UK.

Reflecting earlier  on the highs and lows of his front line service, he  said: “Generally the lows are the failures like not finding the missing person you have been looking for and the agonising over what could have been done differently.

“Sad endings are always a possibility and team members often have to share some of the grief with the families of the people involved.

“Major incidents like Lockerbie leave lasting impressions because of the sheer scale of what has to be done and the hints of the personal lives of those involved that slip through your hands.

“The highs exceed the lows because our memories like it that way,” he declared.

“The best parts are the comradeship of team members and the heartfelt appreciation of people rescued, their families and friends.

“Working together under difficult and often trying conditions and occasionally trusting your life to your colleagues is a great way to produce lasting friendships.”