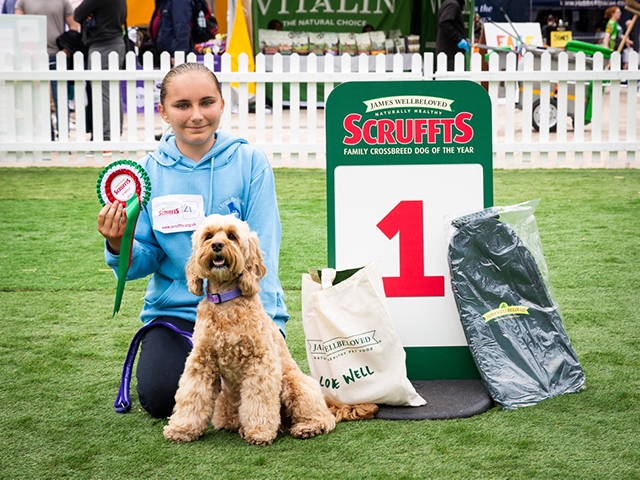 A local dog from Oldham,  has won first place in the Good Citizen Dog Scheme class at Scruffts, the annual crossbreed competition run by the Kennel Club, and will go on to compete in the semi-final stages hosted at the world’s most famous dog show, Crufts, in 2020.

The Scruffts heat, the fourth of six to be held this year, took place on Saturday 20th and Sunday 21st July at MediaCityUK in Salford, as part of the Family Pet Show. The competition attracted over 100 crossbreeds and their owners but just four have made it through to the next stage, earning them a place in the semi-final stages at Crufts 2020.

The overall winners of the semi-final will then have the chance to compete in the final, also at Crufts 2020.

The Scruffts Family Crossbreed Dog of the Year competition, exclusively supported by pet food makers James Wellbeloved, is open to all crossbreeds and mixed breed dogs, of all shapes, sizes and age (as long as they are over six months).

Judging the competitors on the day was Manchester-born singer-songwriter, Daley, who shot to fame after having co-written and featured on the Gorillaz single “Doncamatic” 2009, and more recently touring with Stevie Wonder.

Daley had the tough decision of choosing just one winner for each of the four classes: Most Handsome Crossbreed Dog, Prettiest Crossbreed Bitch, Golden Oldie Crossbreed and the Good Citizen Dog Scheme class.

All dogs competing were judged against the following qualities:

Good temperament with people and other dogs

The four dogs are now preparing to compete at Crufts 2020, which will be held at the NEC Birmingham next March, where the judges will be making the difficult decision of choosing the Scruffts Family Crossbreed Dog of the Year.

Throughout the year, heats of the popular Scruffts contest, which is exclusively supported by pet food makers James Wellbeloved, are taking place at events around the country in search of crossbreeds with that extra special something.

James Wellbeloved is celebrating ten years as the sponsor of Scruffts.

Arthur Renault, Marketing Manager for James Wellbeloved said: “Congratulations to our four brilliant semi-finalists who have all qualified to Crufts next year. It was a fantastic day at the Family Pet Show in Salford and we were impressed by all the entrants who took part.

“James Wellbeloved is very proud to exclusively support Scruffts and we’re looking forward to seeing how our semi-finalists progress!”