You are Here: Home » News » Main News » Oldham Council - 'there can be no excuse for disrupting meetings'

Oldham Council - 'there can be no excuse for disrupting meetings' 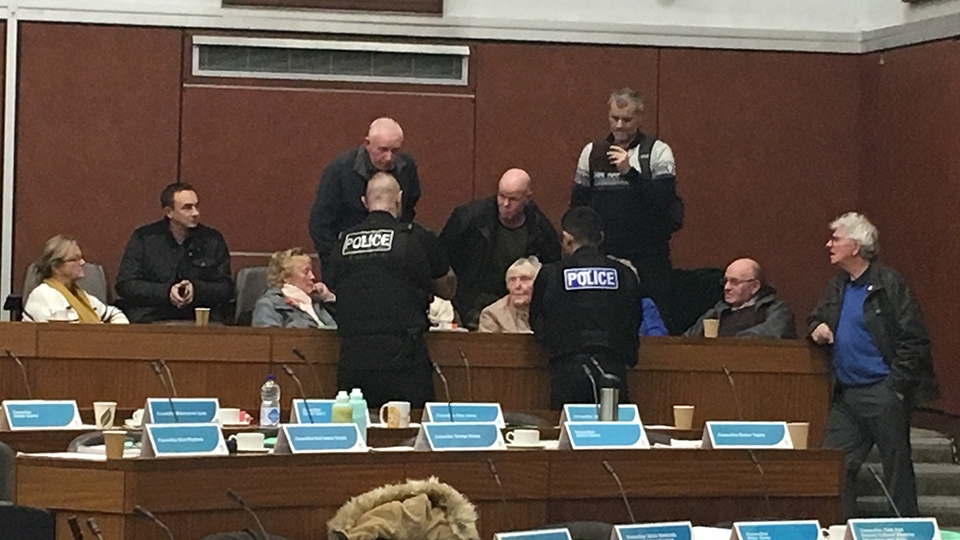 Oldham Council has issued a response in the wake of Wednesday night's chaotic full meeting in the Civic Centre chamber, one which saw police officers forced to intervene following the announced end of public question time.

Residents sitting in the public gallery refused to leave before questions about historic safeguarding allegations were heard, causing proceedings to be adjourned twice.

The disarray began when one resident said she wanted to ask about the launch of a review into whether authorities – including the council and police – responded appropriately to allegations of grooming in the borough in recent years.

The situation became so tense GMP officers had to be called to the council chamber by council staff to speak to the residents.

In total, the meeting was delayed by an hour and 22 minutes as police and council officers dealt with protestors.

However, they were allowed to remain in the council chamber, where they heckled from the public benches for the remainder of the meeting.

The section of the full council meeting reserved for public questions lasts 15 minutes, where councillors answer questions in the order they were submitted to the town hall.

Unheard questions are then published with the answer on the council’s website the next day.

She said the reputation of the borough council appears to be at an “all-time low”.

A statement on Oldham Council's Facebook page this morning read: "Oldham Council has one of the most comprehensive approaches to engaging with residents encouraging them to submit public questions through its website, social media channels and via email.

"Inevitably this means we receive a large number of questions that need to be dealt with at council meetings.

"In order to be fair to those who submit questions, they are answered in the order they are submitted and time is limited in order to allow the council meeting to get through its very packed agenda allowing elected members of all parties to hold the leadership to account for their decisions.

"One resident, Ms Cole, was informed of this fact but refused to accept the decision.in all 29 questions were submitted to last night’s council meeting, six of them were discussed and answered during the course of the meeting, the other 23 answers will be published on the website.

"Transparency is a key part of our democracy.

"An earlier question in the evening covered the same topic Ms Cole wanted to cover and was answered in full by the leader of the council and can be viewed in the recorded video stream of the meeting available on our website.

"There can be no excuse for disrupting council meetings or abusing councillors as they debate key local decisions that impact all our residents."

A historic safeguarding review is being led by academic Mark Peel, who chairs both the Leeds and Lambeth safeguarding children’s partnerships.

The police part of the joint review will be undertaken by Martin Bottomley, head of the Major Crime Review Team.