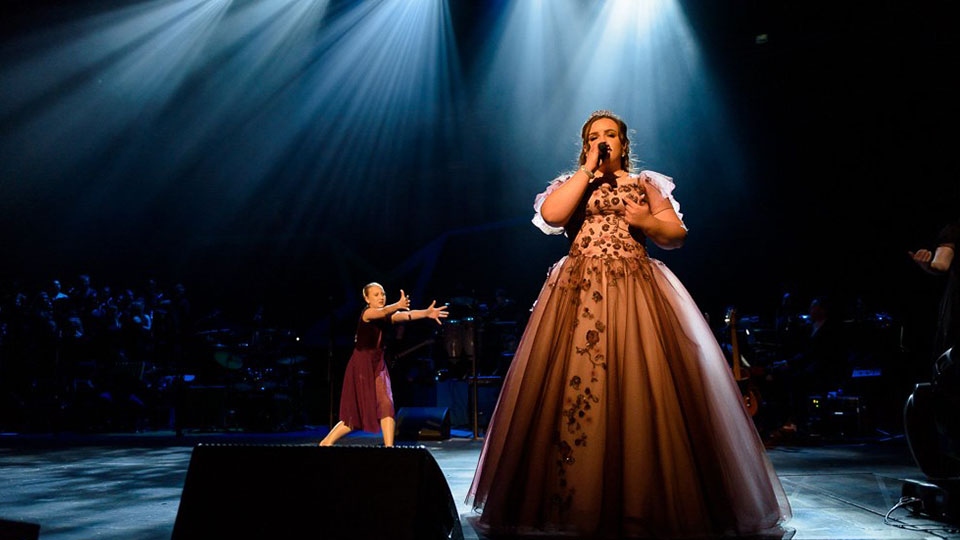 Maddison performing at the OnSide Awards

Talented young people from Oldham took to the stage on Sunday 17th November and performed alongside world-renowned artists, to an audience of thousands and HRH Prince Harry at the OnSide Youth Zones Awards.

The ceremony, held at the Royal Albert Hall in London, recognised young people’s exceptional achievements with awards presented to those who have made a real difference in their community, have breakthrough talent, or have overcome the most challenging of circumstances.

The evening saw fantastic performances from The Script, with their smash-hits ‘Superheroes’ and ‘Hall of Fame’, and John Newman with ‘Love Me Again’.

Boris Amin AKA 3Bless, 16, and Maddison Peacock, 15, from Mahdlo Youth Zones performed onstage with members of other youth zones from across the country.

HRH The Duke of Sussex attended a reception where he met young Youth Zone attendees and award nominees.

His Royal Highness then delivered a speech before presenting the OnSide Health and Wellbeing Award.

HRH The Duke of Sussex told the full Royal Albert Hall: “Whether you are an OnSide member, or have helped make OnSide possible, you’re helping pave the way for someone else.

"This is a chance to celebrate that. A chance for you to see what you have achieved together, the difference you are making, and the role models you have become.

“This moment, when your friends at OnSide have your back, when they are lifting you up, and reminding you that anything is possible, and that you have what it takes to be a game changer.

“Every time I meet someone from OnSide I meet someone who is ambitious for themselves but also for their entire generation, hopeful for the future of our planet, and committed to supporting others.

“You have an amazing fire burning inside of you – full of potential, creativity, compassion, and authenticity.”

Young people shortlisted for the awards were nominated and voted for by Youth Zone members from the OnSide network, and their stories were told throughout the evening.

Mahdlo’s own Anne-Marie Jones, 24, was nominated for the Giving Back award, presented to those who are dedicated to making a difference in others’ lives.

As well as being a member, Anne Marie volunteers for Mahdlo and takes part in their Young Leaders programme.

Louise Ashton, 18, won the Shining Star Award on the evening, presented by John Roberts, Executive Chair of OnSide and owner of AO.com.

Louise became a regular attender of Mahdlo at 14 and after going on an extraordinary journey that saw her self-belief rocket, she excelled in her GCSEs and succeeded in completing the Lean for 17 challenge.

Mike Doran, Youth Zone, said: “We are so proud of the young people who represented Mahdlo at the OnSide Awards.

"Maddison and Boris performed magnificently and dazzled the crowd at the Royal Albert Hall and Anne Marie and Louise deserve all the recognition in the world for their hard work and the determination they have shown.

"All of our representatives have been regulars at Mahdlo and our Districts sessions for a few years now, so to see them develop to this point is absolutely incredible.”

“They are a true reflection of the amazing pool of talent that our young people possess, and what they have done has been exceptional. We could not be prouder of them.”

Jesy Nelson, of Little Mix, received the Gold Award, which recognises someone from the wider OnSide community who has made a significant and lasting difference to the lives of young people.

Jesy was chosen through her breakthrough documentary, ‘Odd One Out’, highlighting the abuse she received at the hands of cyberbullies and its effects on her mental health.

Jesy said: “This is amazing, I can’t believe I’m the first winner of the very first OnSide Gold Award, it’s absolutely incredible. Thank you so much to everyone.”

Kathryn Morley, Chief Executive at OnSide Youth Zones, said: “I am delighted that our first annual OnSide Awards ceremony was a huge success. All of the acts were incredible.

“It was wonderful to shine a light on Youth Zones which have such a transformational effect on the lives of young people.”