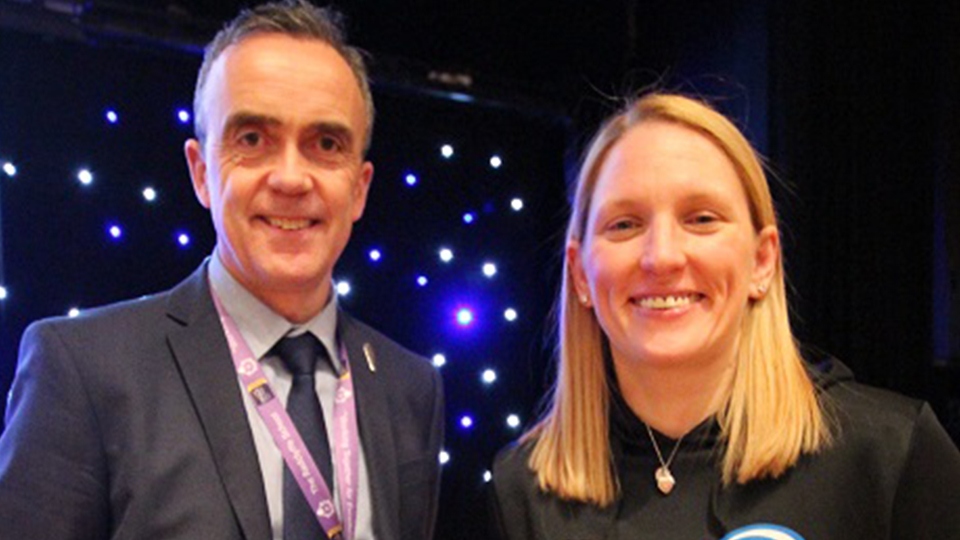 Stacey with Headteacher John Cregg and the boxing belts Stacey has won.

A sportswoman who has represented her country in two sports was the inspiring speaker at The Radclyffe School Presentation Evening this week, in Chadderton.

Stacey Copeland has represented England in both football and boxing.

Following a successful football career where she played for England, and in the FA cup final, and for teams in the USA, Brazil and Sweden, Stacey then pursued her dreams in boxing.

Her main goal is to pave the way for other girls and women to reach their full potential through sport; she believes that her greatest privilege is to inspire and make a positive difference to others.

Addressing the students, Stacey spoke of a fire of injustice and a fire of passion. “We may be angry because of suffering or discrimination, but need the determination to do something about it.”

She told students, “I had the fire of injustice as a youngster but not the fire of passion. When I was called up to play for England I was laughed at.

"Asking for time off work I was left feeling small, ashamed of who I was and feeling an idiot for thinking it was a big deal to represent my country as a female athlete.”

She contrasted this with when she became Commonwealth Boxing Champion, and there was no belt for the women’s title. Finding the fire of passion, she insisted one was made, and it was. “The fire of passion brings about the change you seek.”

Stacey answered three questions, encouraging the students to do the same. “Ask ‘why do I want to change things?’ Face criticism and challenges knowing that you can stand up for courage or stay in your comfort zone – you can’t do both.

Finally, ask ‘what motivates me?’ If you know your purpose you can endure almost anything. Use your gifts to do good, and know why you are doing it.”

She found this when visiting refugee camps in Calais, using the power of sport to inspire people. She spoke of leaving a positive human footprint.

The evening was a celebration of students’ achievement across all year groups, but especially for the leaving year 11s to receive their GCSE and other exam certificates.

The Mayor of Oldham, Cllr Ginny Alexander presented the Duke of Edinburgh awards, students received their prizes and examination certificates, and shared performances in music and song.