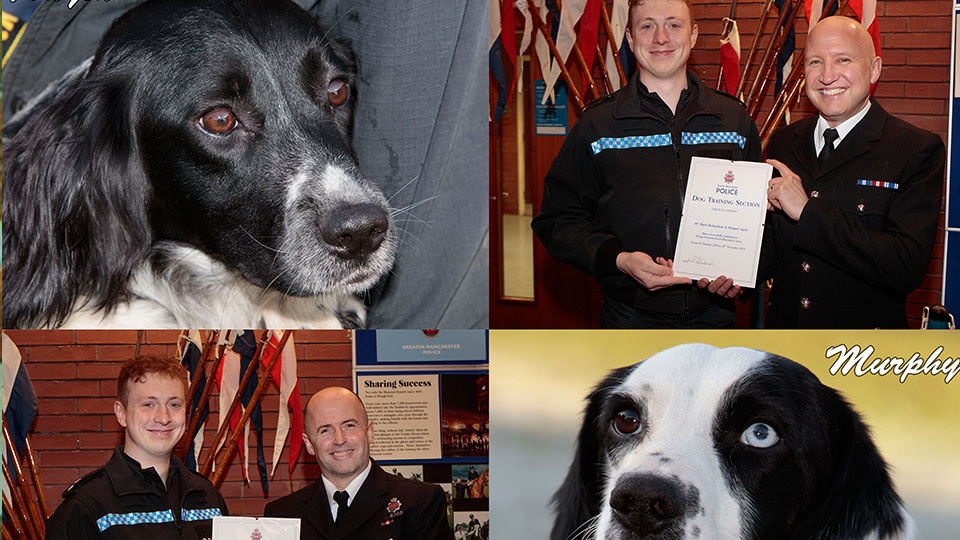 Dogs Aayla and Murphy with their police handlers

Greater Manchester Police have two new dogs that are ready to face the front line as crime fighters.

Aayla and Murphy have just qualified as drugs, firearms and cash detection dogs.

Their training has taken six weeks, and involves going out and about to busy environments to meet people and other dogs.

They both passed and are now ready for action and will be out on the streets of Greater Manchester with their new handlers.

Aayla is a 15-month old Springer Spaniel who was born at GMP and bred specifically to be a police dog.

Despite her subdued look, she is 'a bundle of energy and power' and her natural ability to search was shown on her course when she visited venues across Greater Manchester.

Her nose has already led her to many successful finds in her training.

A police spokesperson said: "She has a bright future ahead and will work with her handler, PC Mark Richardson."

Murphy is a two-year-old Springador (Springer Spaniel cross Labrador) who through no fault of his own, found himself in the care of Spaniel Aid, who are a charity that helps rehome dogs.

A spokesperson told us: "He is a very clever dog and the charity thought he was best suited to a working role so he started his working life at GMP."

Over the last few months he has been out to Manchester Airport and Piccadilly train station, among other places, where he has met lots of people.

"He has taken everything in his stride and is very popular and will be working with his handler, PC Rob Kinley."