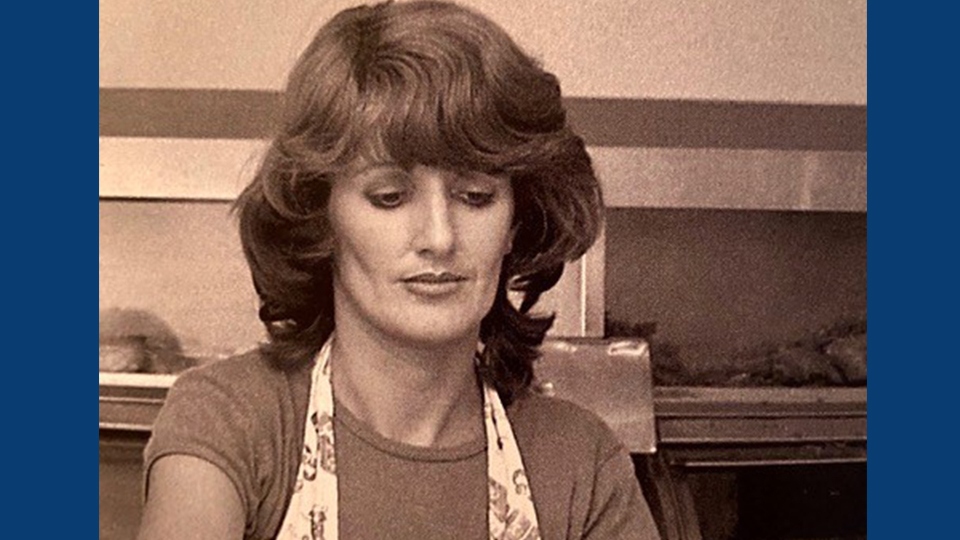 A VILLLAGE  paid a silent tribute to a much-loved community champion Mary Isherwood, who ran Delph Chippy with her husband Graham.

But her sad passing revealed a remarkable story of a woman, born in 1945 in Omagh in post war Northern Ireland, who ‘hired’ a bicycle and absconded from an orphanage aged just 15.

However, whie she was raised at  Nazareth House Orphanage, Derry, she developed a real talent and love of music, playing the violin and singing.

At 11, she  was chosen as one of  a select few when the elite  Little Gaelic Singers toured the United States and appeared on the Ed Sullivan Show.

It was in that same show Elvis’ made a second appearance which was  widely seen as the the turning point in his career setting him in his way to global superstardom. And, in  addition to her star-studded appearance, Mary played at  Carnegie Hall.

For the funeral, the cortege made its way from the Chip Shop to Holy Trinity Church, Dobcross, for a final farewell hosted by  Rev John Rosedale.

Mary’s family were joined by a blend of young and old, close friends and customers - most who became friends - united in a celebration of her life.

Touching readings from Mary’s eldest Grandson, James 11, and daughter-in-law Clarissa, were followed by a heart-warming eulogy from her son, Luke.

He said later: “The church service was, like Mary herself, tasteful, full of affection and brimming with emotion.

"‘Tears were shed, but, as with Mary’s life, there was no shortage of joy as tales of her past filled the church, husband Graham and daughter Grace watching on with pride.

“As the mourners departed the church to share a tale or two, the clear theme was that of a caring, passionate, vibrant star of the community who offered a helping hand to many throughout the years.

“A personification of Mary’s legacy, her four Grandchildren, James, William, Hugo and Theo, will have made her unbelievably proud.”

He added: “The celebration of Mary’s life continued at The Swan Inn, Delph, to raise a glass and conclude a wonderful day for a wonderful woman.”