You are Here: Home » News » Main News » 'Forever Amnesty' knife crime bin for Oldham and other areas of Greater Manchester 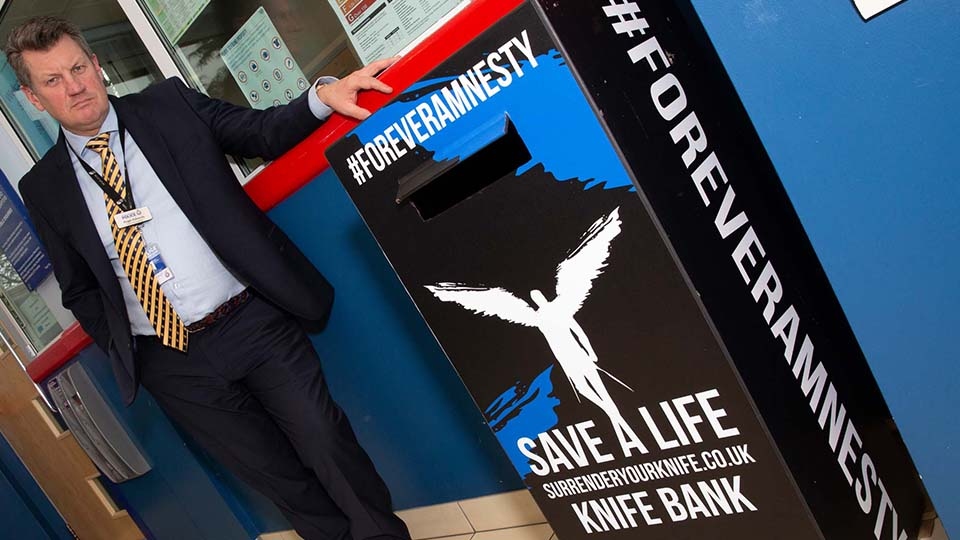 GMP has now launched a forever amnesty following the success of Operation Sceptre’s week-long knife amnesty, which ran in September 2019, and saw over 600 knives deposited in amnesty bins across Greater Manchester.

The project, run by Greater Manchester Police and the British Ironwork Centre, is part of the centre's Save a Life, Surrender your Knife campaign which saw the creation of the nationally-renowned Knife Angel sculpture.

These will allow people to dispose of knives in a completely safe and anonymous way.

The bins will be distributed in the following locations: Oldham, Manchester, Stockport, Stretford, Tameside, Swinton, Wigan, Bolton, Bury and Rochdale.

Greater Manchester Police’s Superintendent Chris Downey said: “We were delighted, and a little surprised with the results of September’s week-long amnesty, as we didn’t expect so many knives to be deposited.

“When the Operation Sceptre team came together with key partners to review the week-long campaign, we discussed the possibility of installing the bins on a permanent basis in an effort to reduce knife crime across Greater Manchester.

"Due to the overwhelming success of September’s amnesty it was something that we unanimously agreed on.

"I want to take this opportunity to reiterate that this kind of violence has no place on our streets, and it will not be tolerated.

"Deploying permanent amnesty bins is just one of the many steps we are taking in our fight against knife crime.

"A large part of our work is out in our communities with young people, educating them on the impact knives can have not just on individuals, but on families and communities.

"Our aim is to understand why people are carrying knives and work to dispel the myth that knives are essential to keeping you safe.

“Carrying a knife often has life-changing consequences, such as being expelled from school, being sent to prison and sadly, loss of life.

"Fear is often one of the main reasons for people carrying knives, as they believe that a knife will protect them, but actually, even if someone doesn’t plan on using the weapon, their chances of becoming a victim of knife crime increases just by carrying it.

“I would strongly encourage people from all over Greater Manchester to see the forever amnesty as the perfect opportunity to dispose of any illegal and harmful knives, as no good can come from carrying one – so please get rid of them. Every knife surrendered is one less knife out on the street, where they can do serious damage.

“We are planning to use all collected blades to create a sculpture, which will represent the ‘Save A Life, Surrender Your Knife’ campaign’s legacy, highlight the city’s efforts to turn the tide on knife crime.”

“The forever amnesty is one of a number of things we are doing to reduce violent crime across the city-region. Through the Violence Reduction Unit, the police, local authorities, youth services, health, education and schools, as well as other criminal justice partners, are working together to embed a community-led approach to prevention and enforcement.”

The Greater Manchester Violence Reduction Unit was set up in October 2019 with funding from the Home Office. It brings together Greater Manchester Police, Greater Manchester Combined Authority, National Probation Service, health and education professionals, youth justice and local authorities to address the underlying causes of violent crime and work together with communities to prevent it.

If you have concerns about someone you know or care about who is carrying or hiding a knife, or if you are aware that knives are being concealed in your community, call the Police on 101 or talk to us via LiveChat at www.gmp.police.uk