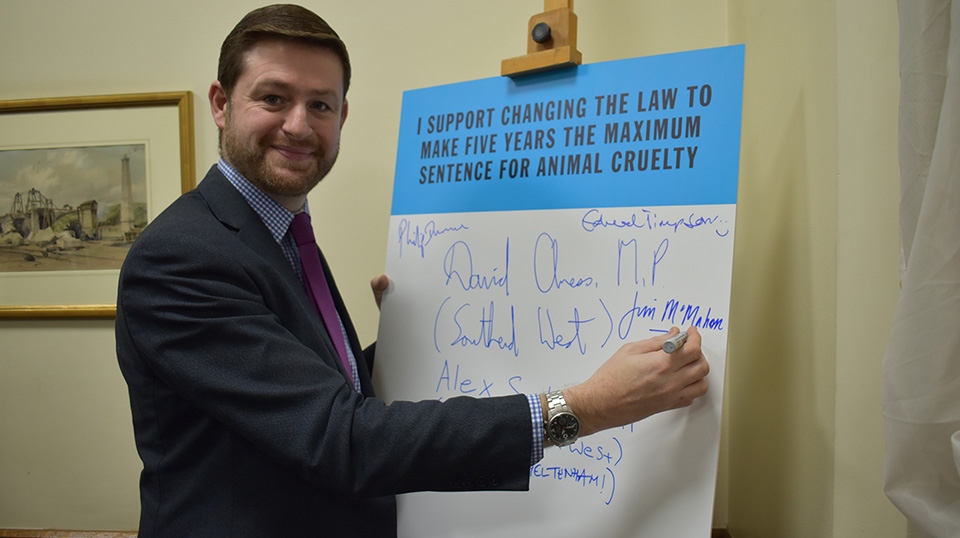 Oldham West and Royton MP Jim McMahon attended a reception at the Battersea Dogs and Cats home aimed at showing support for increasing the maximum sentences for animal cruelty offences.

MPs had the opportunity to sign Battersea’s pledge board to underline their support for changing the legislation.

Currently in England and Wales courts can only hand out sentences of up to six months, a banning order and an unlimited fine.

The Animal Welfare (Sentencing) Bill would change the law and allow a maximum sentence of five years to be applied in the most shocking and inhumane cases. Battersea Dogs and Cats home have been campaigning since 2017 to see this change in legislation as they see the worst cases of animal cruelty far too often.

As well as signing the Battersea pledge board, Mr McMahon has become one of the first MPs to join ‘Finn’s Map of MPs’ – a map of all Members of Parliament who have pledged to ensure that the Animal Welfare (Sentencing) Bill passes through the House of Commons when it returns in the summer.

On signing the pledge board and joining ‘Finn’s Map of MPS’, Mr McMahon said: “Back in January I was asked whether I would show my support for Finn’s Law Part Two, and I jumped at the chance.

"So last week I made sure I cleared space in my diary to get down to the event that Battersea had put on to continue to show my support for the Animal Welfare Bill.

“Animal cruelty is abhorrent, there’s no excuse for it and there’s never a need to treat an animal cruelly – in a lot of cases these animals are helpless and have placed their trust in the perpetrator.

"And the current sentencing neither acts as a deterrent or as a punishment for some of the very worst cases of animal cruelty.

"So I’m pleased to provide my support to this bill, and hopefully we can go some way to fighting this injustice on behalf of all animals who are mistreated in the UK.”

“My office probably receives more lobbies on animal welfare than any other subject, so I know just how important this is to constituents, and I want them to know that when the time comes, I’ll be in the aye lobby voting for this.”