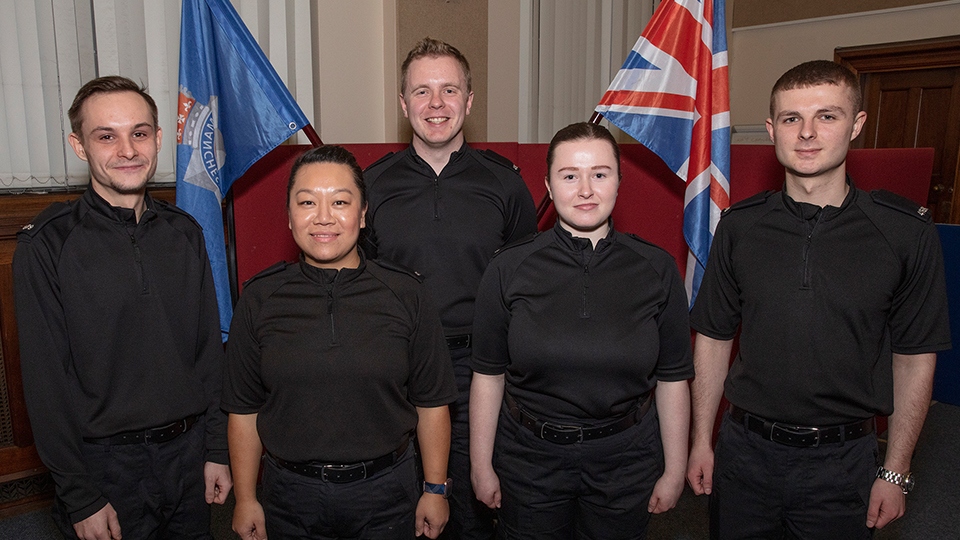 "They play a pivotal role in policing Greater Manchester and helping build relationships, which only makes our communities stronger."

The attestation marks the end of the recruits five-month training programme and the start of their volunteer role. Before being sworn in as a Constable and receiving their police authorities, the volunteers must make a declaration which is known as the Police Oath.

Special Constables, or Specials as they are often referred to, are trained volunteers that work alongside and support GMP officers to tackle crime in our communities.

All Special Constables share the same powers as regular officers, including the power of arrest. As part of the role, the recruits are required to give at least four hours a week of their free time, which is invaluable to the Force.

The Special Constabulary is made up of people from all walks of life that all have their own reasons for joining.

Aaron Moss has grown up in Whitefield and has been posted to Bury – his local division. He decided to become a Special Constable in order to give back something and help improve his community.

Aaron is now thinking of becoming a full-time police officer, after gaining valuable knowledge and experience whilst on the training programme.

Aaron said that he has thoroughly enjoyed getting to know his colleagues during the five-month training programme, and would like to wish them the very best of luck moving forwards.

Andrew Smethurst has been posted to the City of Manchester Division and will be based in South Manchester.

Andrew had a brief career in engineering where he helped work on the set of Strictly Come Dancing and helped to build the machine used on Tipping Point.

Andrew applied to become a Special Constable as he wanted to undertake a new challenge. He is looking forward to getting started and engaging with the community, as well as the opportunity to continue to develop new skills.

James Turner grew up in Tyldesley, and at the age of six he joined the local Scout movement and became a Beaver. Fourteen years later, James is now Assistant County Youth Commissioner for Greater Manchester West Scouts.

James cited the friendships he has made during scouting, as the motivation for becoming a Special Constable.

Lily Li-Yong grew up in Manchester and has been posted to Bolton. For the last seven years, Lily has worked as a biomedical scientist at Manchester University Foundation NHS Trust, and recently received her specialist status in biochemistry.

In her spare-time, she has delivered inspirational talks and workshops on biomedical science in primary schools and at children clubs.

She has volunteered as a Special to fulfil her childhood dream and give back to the community. Lily also wants to wants to inspire her three children to follow their dreams and believe in themselves.

Natalie Showell became a volunteer Police Cadet in 2013; having wanted to join the police from an early age.

At 18, Natalie joined GMP as an apprentice and in June 2019, she successfully attained a full-time role as a member of police staff working in the Operational Communications Branch.

With a passion for helping the community and a desire to learn new skills, Natalie decided to join the Special Constabulary to continue to help communities in Stockport.

Chief Superintendent Stuart Ellison said: “Each recruit has their own personal reasons for joining GMP and I always enjoy hearing the reasons why our Specials choose to volunteer.

It’s always pleasing to hear how each Special want to make a difference, especially within our local communities, by tackling crime and protecting people.

"I would like to take this opportunity to thank the recruits and wish them the best of luck on their journeys.”