You are Here: Home » News » Main News » Regional rate of Covid-19 infection and hospital admissions fall in a week 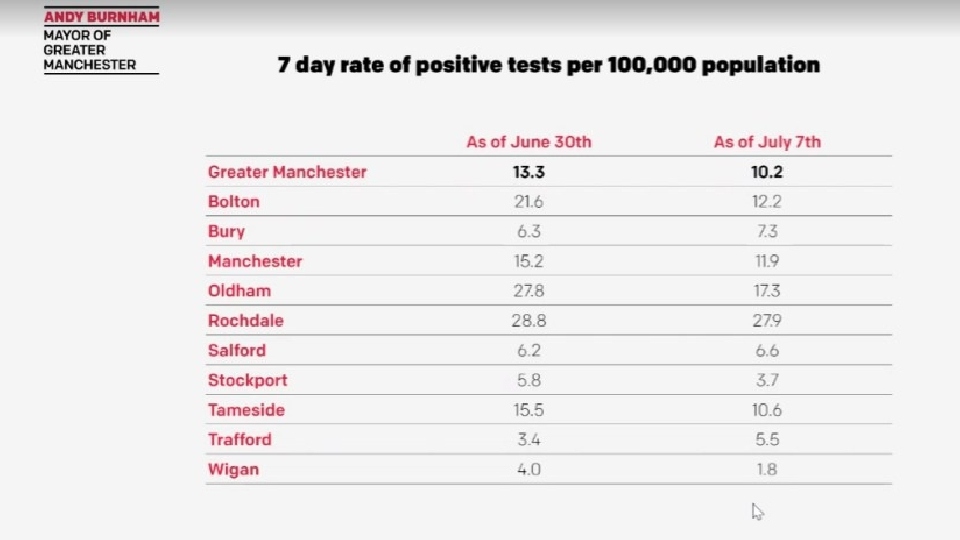 Greater Manchester’s coronavirus infection rate and the number of daily hospital admissions has fallen in the last week, according to new figures.

It is the second week in a row that regional leaders have had the most up-to-date testing data from the government, allowing authorities to paint a clearer picture of their local Covid-19 situation.

The infection rates have been calculated by combining ‘pillar one’ data gathered by councils and NHS trusts, as well as ‘pillar two’ statistics from testing centres.

Rochdale still has the highest infection rate in the city-region but the numbers are steadily beginning to come down.

Meanwhile, the borough with the second highest infection rate, Oldham, has seen its number of cases drop by more than a third.

Wigan, which many had claimed to be at risk of a local lockdown as seen in Leicester, has the lowest infection rate in Greater Manchester.

And while Covid-19 infections have risen slightly in Salford, Trafford and Bury, the city-region’s mayor Andy Burnham has insisted that things are still moving in the right direction.

“They are all quite modest and relate to a small number of cases,” he told a press conference today.

“In Salford’s case it’s one or two extra cases so it’s nothing that gives us any particular cause for concern.

“These figures will fluctuate people shouldn’t get too worried about them.

“[The infection rate] is still relatively high in Rochdale, which has had a more proactive approach to testing than most throughout this crisis.

“They’ve had a military-run testing station in the town centre, but I wouldn’t want to say that’s the only reason.”

Daily hospital admissions of Covid-19 patients have also dropped from nine to four, while the number of people in ICU is down from 24 to 22.

The number of patients in non-ICU beds has seen the most significant drop from 342 last week to 187 – a 45 per cent decrease.

Mr Burnham said: “This is a real movement in the right direction, and again that reflects the efforts of staff who have done a wonderful job caring for people and supporting them through their illness.”