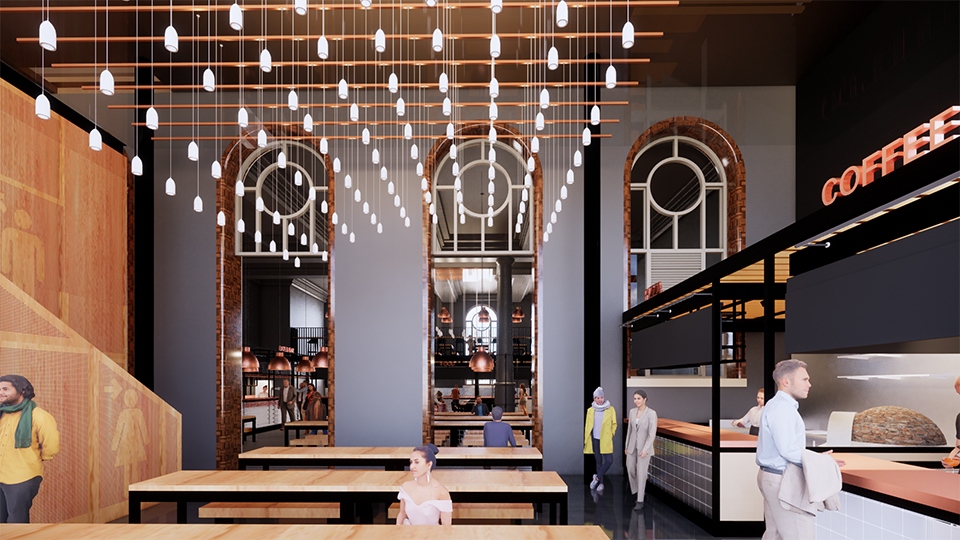 If approved, work will begin on the Egyptian Rooms later this year with a planned opening of summer 2021

Situated in the Egyptian Rooms of the landmark Old Town Hall, the casual dining market would deliver a brand-new offer to Oldham town centre.

Featuring six food and drink concessions, it would cater for around 200 people with both inside and outside seating including a large covered al-fresco dining area on Parliament Square.

The venue proposes a similar concept and layout to existing independent food markets across Greater Manchester - with food and drink traders located on the perimeter and a central dining and socialising space. Potential stalls could include coffee, pizza and a bar.

Oldham Council has now applied for permission to redevelop the room - which was once home to the Borough Treasurer’s Rates Hall - and is in discussions with potential operators.

Cllr Sean Fielding, Council Leader and Cabinet Member for Economy and Skills, said: “This would be an exciting new food and drink experience for Oldham and a great addition to the Old Town Hall and the fantastic businesses already based there and across the town centre.

“We’re committed to ensuring Oldham has a vibrant leisure and night-time economy and we are confident a market like this will be welcomed by residents and visitors.”

Following a £37 million redevelopment, the Grade II-listed Old Town Hall was transformed from a derelict building. It is now home to a seven-screen Odeon cinema, Nandos and Molino Lounge.

The council has submitted a bid to the Government’s Future High Street Fund to support the delivery of the food market.

If successful, the funding will also support other regeneration projects across the town centre including public realm improvements and the creation of a digital start-up hub.

Cllr Fielding added: “Coronavirus has had a huge impact on Oldham - which is why it’s more important than ever to do everything we can to create investment, jobs and opportunities for people.

“We look forward to hearing the outcome of the Future High Street Fund which will enable us to deliver key regeneration projects to help our town build back better.”

Sacha Lord, Night Time Economy Adviser for Greater Manchester, said: “Many residents and operators in Oldham have spoken to me about how thriving the night time economy used to be.

“I have now had many visits and very positive conversations with Cllr Sean Fielding, the Leader of Oldham Council.

Sean completely understands and supports the idea of re-invigorating the sector and last year assembled a Night Time Economy Taskforce.

“Last year, during one of my visits, I was shown a very ambitious project, the Egyptian Rooms and was told about the plans to bring it to life and expand footfall into the Old Town Hall.

“Now, even during these challenging times, I’m delighted the Egyptian Rooms are progressing.

"Not only will it create many jobs but could also become a nucleus to make other independents flourish, as we have seen with food halls in other areas of Greater Manchester.”

If approved, work will begin on the Egyptian Rooms later this year with a planned opening of summer 2021.