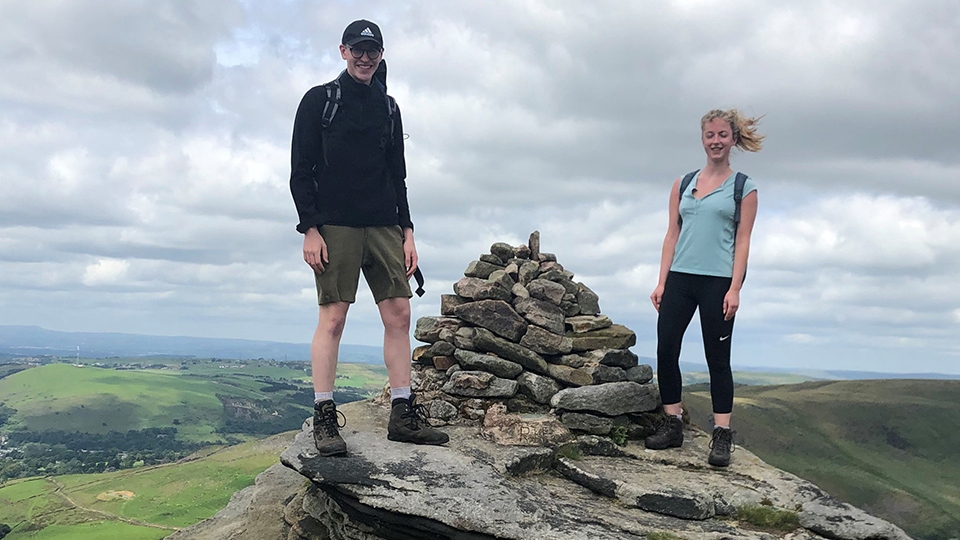 Cousins Jack Brierley and Emily Seville at the rebuilt cairn

Two young countryside lovers have been praised for restoring a historic cairn built in memory to a pair climbers who died in mountaineering tragedy.

Mindless vandals caused outrage across Saddleworth and the wider community when they wrecked the weather-beaten shrine on a dramatic headland overlooking Dovestone and Chew Valley at Greenfield.

In addition to the cairn, there is commemorative plaque to  Brian Toase and Tom Morton, who lost their lives in 1972 making a descent in the Italian Dolomites.

The cairn was restored by cousins Jack Brierley and Emily Seville who heard of its destruction on social media. They take regular walks in the area with their uncle, Charles Brierley, owner of the White Hart at Lydgate.

Charles said: “Emily and Jack saw the post and suggested our next walk should take in the  cairn and see if we could start to rebuild it.

“The original stones had been strewn down the valley looking like the vandals had tried to see how far they could throw them.  We used those stones but supplemented them with others as some had broken into small pieces.” 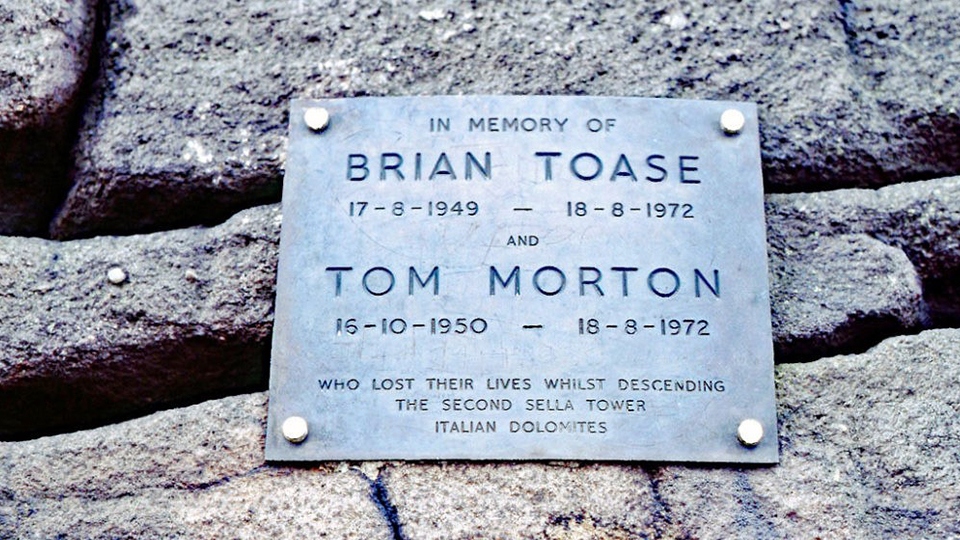 Jack, 21, from Greenfield, a engineering student, said: “I don’t understand why anyone would walk up to this headland, see a cracking view overlooking Dovestones and down Chew Valley and then go and destroy a cairn: it’s just mindless stupidity.  I enjoyed putting right their wrong.”

Emily, 22, from Moorside, has just completed an arts degree and is waiting a placement in Mexico. She said: “The damage annoyed me. We go walking because we like where we live and we should go about it by trying to leave no trace.”

Tony Martin, a climber on the Dolomites trip, knew both the dead climbers well. He said: “It was distressing to see photographs of the vandalised cairn and quite amazing that these good people rebuilt it very quickly indeed.”

Recalling the fateful trip he said: “Tragically a belay gave way while the lads were descending the Second Sella Tower and they fell to their deaths. It was a great shock to both clubs, they were popular guys. It was agreed we would build some sort of memorial to them.

“Chew Valley was their ‘stamping ground’ and we did a recce and chose the Fox Stone as the site.

“As the land at the time controlled by North West Water we obtained permission from them to build a cairn and place a plaque there.

“We carried cement, tools and a fair quantity of beer, and built the cairn one summer Saturday in 1973. The bronze plaque was made by a Rimmon member at British Aerospace, fixed to the north-facing side of the Fox Stone where it remains to this day.”

He added: “The cairn required a few minor repairs over the years but stayed completely intact until unknown morons smashed it up a couple of weeks ago.

“Thankfully the damage was spotted and the cairn was rebuilt. Hopefully it will survive a few more years.”