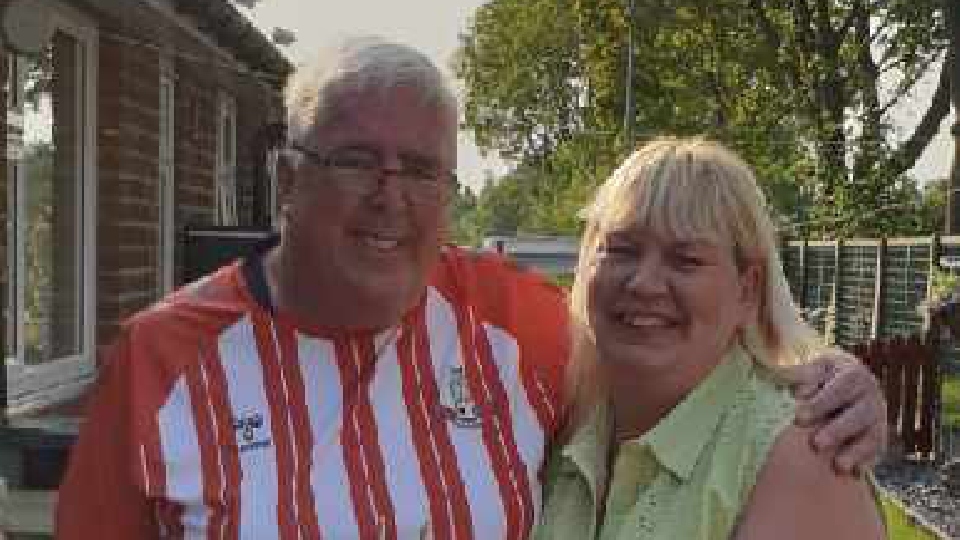 Richelle Walsh and her husband Trevor

Because, unbeknown to them, Richelle’s husband, Trevor, had contracted coronavirus and spent 54 agonising days in Oldham’s ICU fighting the disease.

But now after returning safely home, the couple, married for 14 years, have revealed their daily struggle and resolute determination to beat the virus.

Richelle is the much-loved customer care assistant at the station and holder of a BEM for services to the rail industry and the community of Oldham.

Locally, she received a prestigious Above and Beyond award for going the extra mile supporting villagers.

And she regularly brings large tins of chocolate to the station to share, from a social distance, with travellers.

Recently, she handed out free face masks to rail users.

Trevor, a type 2 diabetic, was sent home for shielding by his employers Northern Rail where he is a rail despatcher at Salford Central.

Initially he did not show any corona symptoms, but after three weeks his facial colour changed and his speech was slurred.

"And hospital staff immediately put me on an oxygen mask.

"That is the last thing I actually remember."

Richelle, 53, had to self-isolate from work for two weeks, but showed no symptoms of the virus and has even had a negative swab test before returning to work.

And her personal ordeal heightened when she was asked by the medical team if Trevor’s heart failed could they can put a DNR (do not resuscitate) on his notes.

She said: “I agreed, but with the promise they would do everything they could and would continue to look after him the best they could.

"By Wednesday the DNR had been removed and it was hoped he would recover.”

Said Trevor: “The Intensive Care staff were, and are, amazing.

"They looked after me to the highest degree, and kept Richelle informed, which gave her great comfort.

“I had a voice box fitted to the tracheostomy.

"And it was the nicest thing being able to ring Richelle and speak to her over the phone... very emotional but in a good way.”

Trevor was waved out of ICU by the staff on June 4, and four days later allowed home.

He said: “I sat in the front room I had left eight weeks previously watching TV with my wife.

Trevor is now undergoing intensive physiotherapy at home and declared: “My memory is struggling.

“Passwords and numbers are difficult to recall and remember.

"Anxiety and nightmare/flashbacks are all symptoms of being in a coma.

“I have to remain positive, but I would plead with people to take this virus seriously.

“Remember, even if you don’t have symptoms, you may still be carrying the virus and passing it on to your older family members.

"Your actions today could kill somebody you love tomorrow.

"Please keep this in mind.”