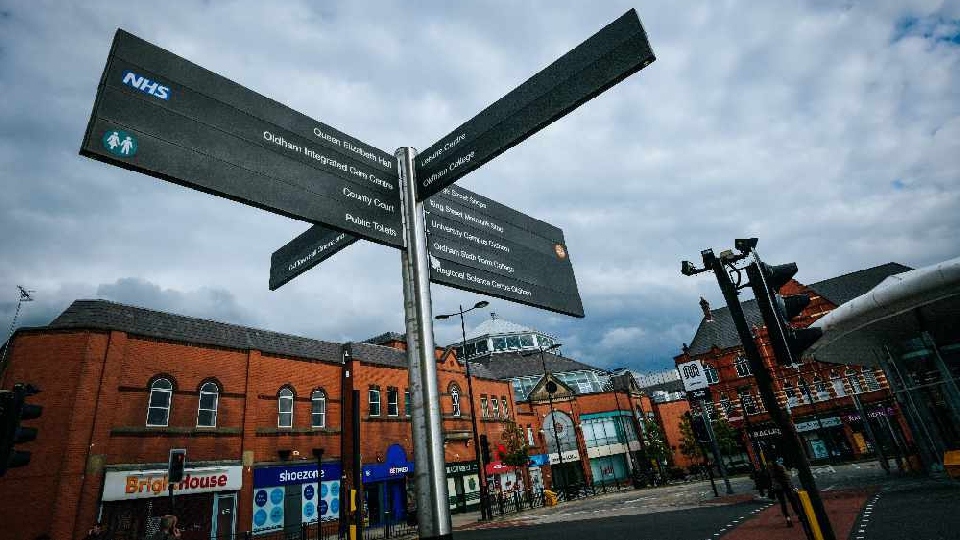 Oldham will remain with remain restrictions on residents for at least another week.

Tougher restrictions which ban people from socialising with anyone they don’t live with are to remain in place for a further week in Oldham, the government has confirmed.

The number of new coronavirus cases in the borough is now on a downward trend after spiking dramatically in the first week of August.

However the borough still has the highest incidences of Covid-19 in the country, according to Public Health England.

It had been feared that Oldham was on the edge of being plunged into a full Leicester-style lockdown, with its pubs, restaurants and non essential businesses forced to shut.

However ramped up targeted testing and other measures – including sending teams out on the ground to speak to residents in hardest hit areas – have been successful in bringing numbers down significantly.

Council leader Sean Fielding said: “I think our targeted communications in some of the areas that are most affected has had a real impact.

“I know that people who live in those communities in central Oldham say there has been a noticeable behavioural change and they see more people wearing face coverings than before – and that’s all over the borough.

“There has been more compliance in pubs and bars and restaurants and we have taken some action against a pub that hasn’t been complying, where there were large gatherings.

“What’s worked is increasing enforcement and targeted messaging and door to door testing as well, finding the infection and telling people to self isolate.

“We have come past the second peak now, provided we can keep up the momentum.”

Last Friday health secretary Matt Hancock agreed with the position of local leaders that a full lockdown would not be necessary in Oldham.

Coun Fielding said that such a decision would have been ‘catastrophic’.

“It was a huge relief that we didn’t go into full lockdown. The damage to the economy, to people’s mental health would have been irreparable for decades,” he added.

“The council would have been spending the next twenty, thirty years spending our resources on trying to repair the damage of a full lockdown which would have lasted for just a couple of weeks.”

However stricter measures were put in place, with people living in Oldham, as well as specific wards in Pendle and Blackburn, no longer allowed to socialise with anyone outside their household and only use public transport if essential.

Previously different households had been allowed to meet in public spaces, such as parks, and the outside areas of pubs and restaurants.

The rules don’t prevent people from shopping, going to work or attending childcare settings, including schools, which open from September 1.

But it means that any social activities – indoors and outdoors – can only be shared with people that someone lives with and their immediate household.

The numbers of people who can attend weddings, civil partnerships and funerals has also been limited to household members and close family and no more than 20 people.

Local restaurants are being encouraged to stop taking walk-ins, and only seat people who make reservations in advance, up to a maximum of six people per table.

The government has confirmed today (Friday) that these measures are remaining in place for a further week.

Coun Fielding said he had been ‘frustrated’ by the additional restrictions being put in place, as they had asked for two weeks to demonstrate that the local response was sufficient in bringing the infection rate down.

“It was still better than having businesses shut down but having looked at how quickly the infection rate has fallen, if they would have given us the two weeks then perhaps this wouldn’t have been necessary,” he added.

“The government wanted to do something in Oldham, but the narrative really started to change.

“It became untenable to put it into a local lockdown but they still had to do something, that’s why they had to take the additional restrictions.

“I would suggest they were more politically motivated than driven by the science.

“To say that the measures that came in last weekend are what has driven the drop that we have seen today, I don’t think is correct, I think it’s the intensive work that we were doing before that.”

The government says that the sharp rise in cases in areas like Oldham is in part due to a major increase in testing led by local councils.

But as the percentage of people testing positive is also increasing, data suggests the increase continues to be due to social mixing between younger age groups of 20 to 39-year-olds.

Oldham is now even more of an outlier across the region, after the government chose to relax measures in other boroughs.

Wigan had already been taken out of the wider restrictions on socialising put in place across Greater Manchester due to its low numbers of cases.

And on Friday the government confirmed that Stockport, Bolton and Trafford were also being removed from the lockdown measures preventing different households socialising inside.

A ban on two households mixing indoors will continue in Manchester, Salford, Rochdale, Bury, and Tameside.

Coun Fielding said that next week he would be speaking to chiefs in Greater Manchester about petitioning for the Oldham restrictions to be lifted if the borough’s infection rate dropped below 50.