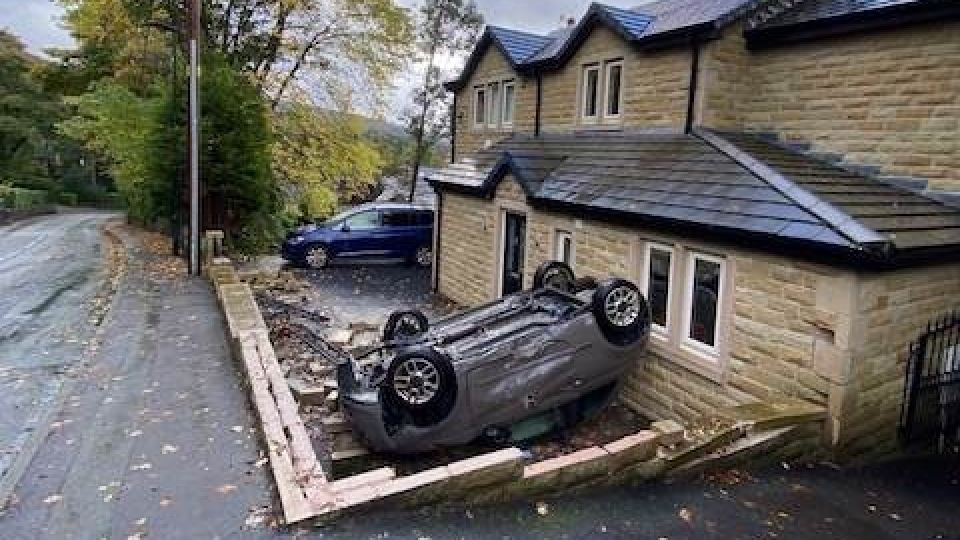 The car overturned during the incident.

An investigation is underway after a university student had a remarkable escape from injury when her car overturned and landed upside down in the garden of house.

Abigail Toothill, 20, spent five hours in hospital after walking away from the crash which left her badly shaken with a sore neck when her saloon upended on Church Road, Uppermill.

The car demolished a garden wall leaving it upside down, propped up by the front wall of the modern home.

Now ward councillors Pam Byrne and Graham Sheldon have launched an inquiry after reports of other incidents involving vehicles leaving the roadway at that point.

And the owners of the damaged property have revealed their home has been hit by vehicles three times in the last two years and five times overall in the 17 years they have lived at the property.

Householder Deborah Williams said: “The problem has definitely got worse.

“The councillors have arranged a meeting with an engineer from Highways to discuss what can be done to alleviate the safety issues.

“I am determined to see something done about it as it is a miracle that Abigail wasn't more seriously injured.

“If anybody has been walking along the pavement they could have been killed. I'm so exhausted from it all. My husband has just said that in all cases the drivers have ended up crossing onto the wrong side of the road.

“If any vehicles had been coming in the opposite direction, there would have been a nasty head-on collision. Visibility is bad due to the steep hill.

“I'm just nervous our property is now unprotected while the walls are down. The structural engineer told us had the surrounding walls not been there, the car would have ended up in our kitchen at the back of the house.”

Abigail’s mother, Alison Toothill, a school head teacher, said there has been a massive response from the local community.

Abigail, a twin, is a third-year undergraduate at Leeds Beckett studying fashion and textiles and graduates in July.  Mrs Toothill praised the householders, Royal Oldham Hospital and GMAS for their “amazing support.” for her daughter.

Councillor Byrne said: “Graham and I will be visiting the scene. I am in touch with the highways engineer and have knowledge of a record being kept about previous incidents at this site.”