You are Here: Home » News » Main News » Praise for council and councillors after crash at Uppermill blackspot

Praise for council and councillors after crash at Uppermill blackspot 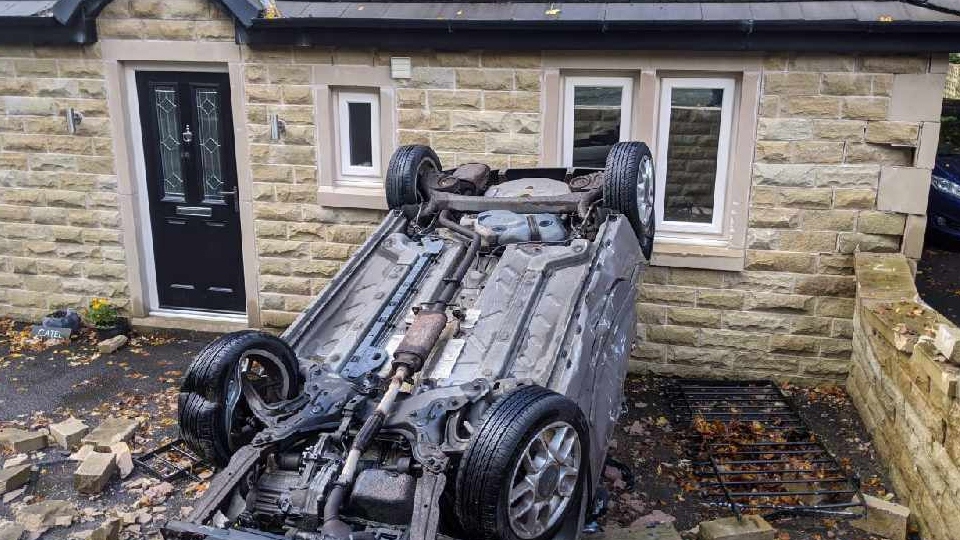 The scene of the crash on Church Road, Uppermill

A council’s a top engineering team and local ward councillors have been praised for their quick intervention after a car landed upside down on a country road blackspot.

Abigail Toothill, aged 20, spent five hours in hospital after surviving a remarkable crash when her saloon upended on Church Road in Uppermill.

Her car completely demolished a garden wall of a house and ended propped up by the front wall of the modern home, leaving her badly shaken with a sore neck.

Councillors Graham Sheldon and Pam Byrne stepped in and organised a “productive” site visit to the crash scene by engineers after it was revealed reports of other incidents involving cars had happened in the vicinity.

And Gary Sutcliffe, Oldham’s Traffic, Network Management and Collision Reduction Team Manager, Highways and Engineering, said in a letter to Cllr Sheldon anti-skid surfacing is to be laid along the bend.

“Weather permitting, work will start on Monday and take a couple of days. During the work the traffic will be controlled by temporary traffic lights," said Mr Sutcliffe.

“This treatment will mitigate the fact that the bend suffers from ‘adverse camber' and is intended to provide more grip for vehicles particularly during heavy rain.

“Other work that will follow will include an enhancement of the existing bend warning and averse camber sign already there and additional chevron signage on the bend itself."

The worried owners of the damaged house said their home has been hit by vehicles three times in the last two years, and five times in the 17 years since they have lived at the detached house.

Houseowner Deborah Williams said: “I’m impressed at the quick response from Oldham‘s highways team and the very supportive action of the councillors who met and discussed plans.

“Special tarmac is being a is being laid to aid grip and chevrons are to be put on the band itself.

"There are likely to be other measures too.”

Cllr Sheldon said: “Cllr Byrne has been busy supplying historic evidence of accidents at this spot, which I am sure has helped speed up some action.

"And I have discussed a 20 mph speed limit and other options.”

Abigail’s mother, Alison Toothill, said Abigail is still very shaken, but has received lots of positive messages from friends and family, including the family of the house that was damaged.

“We we are thankful Oldham are taking preventative steps to stop this happening again, and the work by the councillors," she said.