You are Here: Home » News » Main News » New images reveal how new secondary school set to open in Middleton next year could look 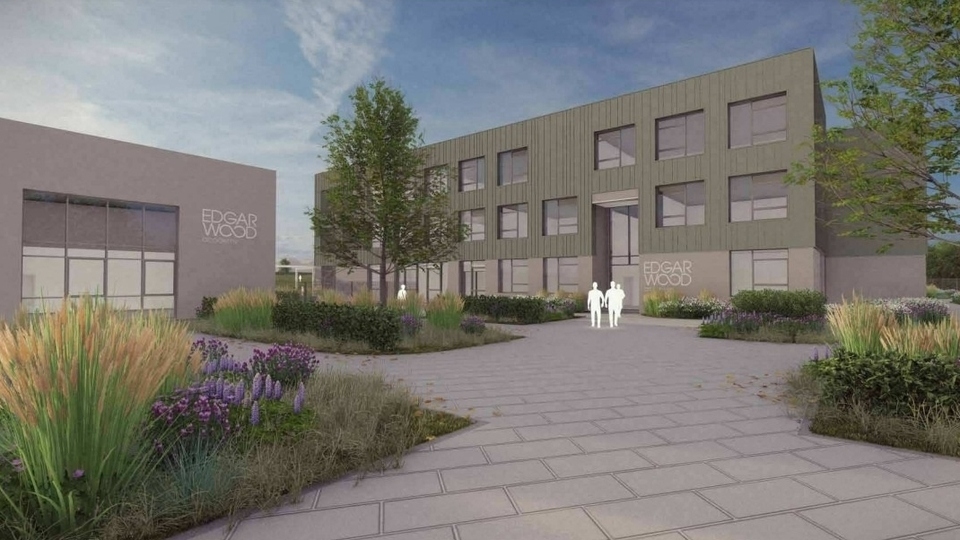 A CGI of the proposed Edgar Wood Academy in Middleton

These new images show how a secondary school set to open in Middleton next year could look.

Planning chiefs have already given ‘outline’ permission for the new school – dubbed the Edgar Wood Academy – to be built on grazing land at Birch and Bowlee.

But while that approved the development ‘in principle’ – together with a new access road off Heywood Old Road – a fully detailed application has now been submitted by the Altus Education Partnership.

It sets out the appearance, layout and scale of the development, as well as including further information on parking and sports provision.

The proposals confirm the school will feature two main buildings: a three-storey teaching block and a separate two-storey sports hall connected by a covered walkway.

Playing fields and a Multi-Use Games Area (MUGA) are also placed close to the sports facility.

A total of 183 parking spaces – including 91 staff and 68 standard bays – will be provided on site, while 42 new trees and 227m of native hedgerow will be planted as part of the landscaping.

A planning statement submitted with the application says the proposals as ‘well designed’ and will ‘create a functional and very pleasant school environment conducive to learning’.

It adds: “The layout provides ample outdoor areas arranged in an optimal way for the delivery of the curriculum, formal and informal recreation, and for any community use.

"The building scale is considered acceptable in the context of the site’s setting and context.”

The document goes on to describe the building’s ‘contemporary’ appearance as being in keeping with the green and open setting’,  with material choices that will not dominate the landscape.

Rochdale council’s planning committee granted outline approval in October, after hearing that Middleton was facing a shortfall of 138 school places by 2022, growing to around 200  by 2028.

Coun Aasim Rashid described it as a ‘wonderful opportunity’, while Coun Shah  Wazir urged colleagues to back the proposals without delay.

However, the plans faced opposition from locals residents.

They were represented by Jillian Jones – who set out a host of objections to the plans, from the loss of wildlife habitat and ancient hedgerows, to increased congestion, drainage problems and security concerns.

These were supported by Norden councillor Peter Winkler, who agreed the proposed site was not right for the development, but he was the only member to take that view.

Provided the detailed plans are approved by the council, the school is due to being welcoming pupils at the Bowlee site in September, 2022.

However, it will first open in temporary accommodation at Hopwood Hall’s Middleton campus in September this year.

There will be an initial intake of 120 Year 7 pupils – four classes of 30 children.