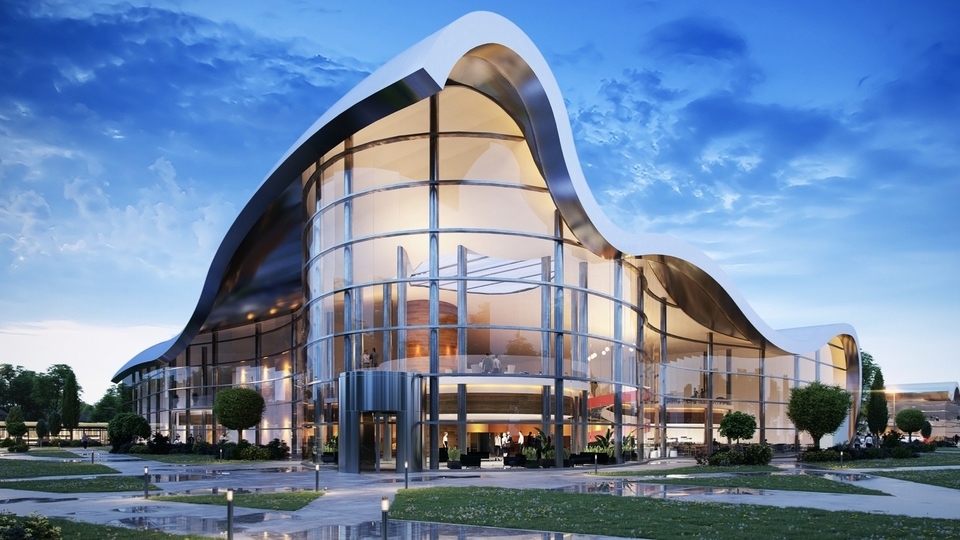 An artist's impression of the proposed Rochdale 'AMPI' development

Rochdale is eyeing an exciting future as a ‘centre of manufacturing excellence’ after it was awarded £23.6m from the government’s Towns Fund.

It is one of 45 places across the country set to benefit from a £1bn tranche of funding for ‘left behind’ areas, announced in the budget.

Although just shy of the £25m bid for, it means a number of ambitious plans drawn up by the Rochdale Towns Fund board  are set to go ahead.

These include 700 new homes in central Rochdale as part of the regeneration of Lower Falinge, major improvement to the A58 at St Mary’s Gate and new medium-sized units at Kingsway Business Park.

The cash will also ‘drive forward’  a proposal for more than 200 new homes at Central Retail Park.

The first phase of the council’s station gateway project, it includes a mix of apartments and community facilities.

But it is the prospect of a new advanced machinery and productivity institute – or AMPI – which council leader Allen Brett describes at ‘the biggie’.

It’s a view shared by Paul Simkiss, chair of Rochdale’s Town Fund board – which is made up of public and private sector partners from across the borough.

“It’s a massive statement and it’s great for the town. It shows Rochdale is well on its journey in the right direction.

There are a few things in there, seven different projects, but by far the biggest is the AMPI.”

Early-stage funding of £50,000 for the AMPI was secured  by The National Physical Laboratory and partners including Rochdale Development Agency last year.

The institute – likely to be based at Kingsway Business Park –  is expected to generate around 660 direct new jobs and 530 indirect jobs across the region.

He said: “It’s the first time this kind of thing has been done in a town and not a city. I think it’s going to be massive for training our youth and for our companies – and bringing interest to the area.

“It will generate jobs in the short-term and in the long-term will bring industry,  manufacturing and creative industry into the area.

"It’s really good for the area.”

Similarly enthused was Rochdale MP Tony Lloyd,  who said it would enable the continuation of the ‘upgrade and regeneration’ process that has brought the Riverside complex to the town centre among other projects.

Mr Lloyd said it was vital to reshape the town so it can thrive over the coming decades.

“It starts from things like recognising we want a 21st century railway station in Rochdale and we want to see more housing in the town centre – bringing people back into the town centre because it changes the vibrancy,” he said.

“The old idea of the town centre being just for retail is probably gone. The kind of shops that may have seen in the past are no longer there.

“But bringing people back into towns is a great location between the bus station and the railway station – and the tram, of course.”

And Mr Lloyd – who has represented the town in parliament since 2017 – also singles out the investment in the AMPI as a ‘big part’ of the Towns Fund boost.

“That really is important, people don’t always recognise it, but we have some high-spec, high-tec, world class manufacturers in Rochdale," he added.

“But obviously their future, and the future of developing new businesses depends on having those skills and this can launch that next generation.”

He added: “We can become a centre of really high-tec manufacturing for the future, and that’s a great thing.”

Like many post-industrial areas Rochdale has seen hard times over recent decades.

But Mr Lloyd believes the AMPI could also change how people outside Rochdale - and ‘perhaps more importantly within it ‘- see the town.

He hopes it can further Rochdale’s image as ‘a go-ahead town’ – ‘a place worth living in and investing in the jobs and skills of the future’.

“A lot of areas in northern England cite advanced manufacturing as one of their key industries,” he said.

“We are going to have the number one spot to develop what those produce. This will be at the very cutting end and is going to be based here in Rochdale.”

And he also believes the AMPI will ‘transform the borough’s image’.

“People will see Rochdale as an area for manufacturing excellence,” he said.

“If you speak to people in Rochdale sometimes, they can be a bit down on the town.

"This will be a serious game-changer.

And Coun Blundell stresses that the inward investment the borough will now be able to attract – an estimated further £100m – is perhaps the biggest bonus of all.

Projects set to benefit from the Towns Fund also include a a new conservation skills studio at the town hall – where students will learn how to restore stained glass, artwork and antique furniture.

Coun Brett, who has led the council since 2017, said the cash was ‘another vote of confidence’ in the borough and the ‘proven track’ of the council and its partners.

He added: “Our bid was carefully put together to create lots of different opportunities all across the borough, with lovely smaller projects, like the heritage skills conservation studio at Rochdale Town Hall, and massive game changing developments, like AMPI, which could turn Rochdale into a real centre for innovation.

“When coupled with our many other regeneration schemes, these projects will help us forge a really exciting future for the borough and its residents.”

Spearheaded by the Department for Housing, Communities and Local Government, The Towns Fund is a £3.4bn pot of cash set aside by government to help drive economic regeneration in selected areas.

One hundred different towns from across the UK were given the opportunity to bid for a share of the money.

Only two other areas of Greater Manchester were included in the first £1bn tranche – Bolton and Cheadle, in Stockport.

There were 45 ‘Towns deals’ in total.

Rochdale council also intends to bid for funds from the government’s £4.8bn Levelling Up fund – a separate pot of cash announced by Chancellor Rishi Sunak at last week’s budget.