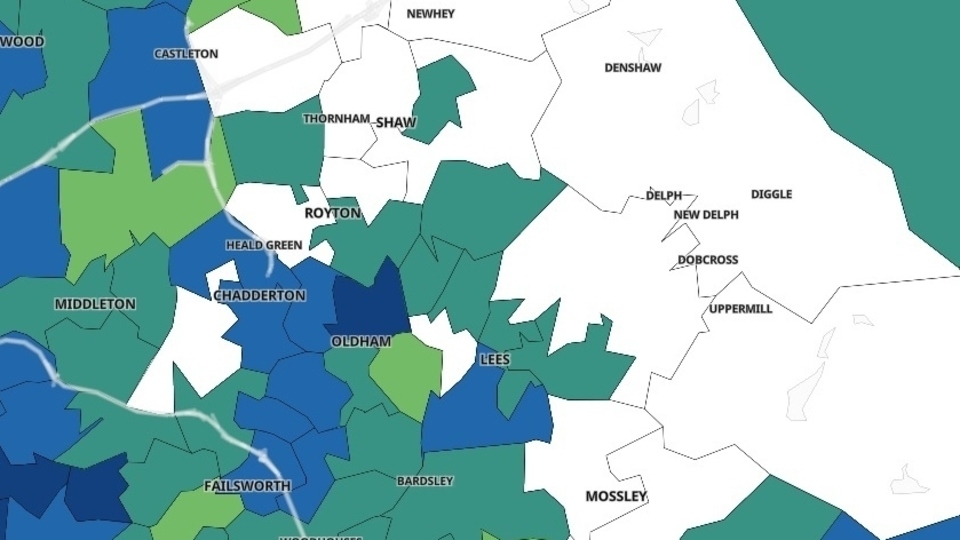 Neighbourhoods in Oldham are seeing Covid-19 cases rise while the virus remains suppressed in areas of Saddleworth and Shaw.

As the more infectious ‘Delta’ variant which was first identified in India begins to spread across the region, the borough is seeing an uptick in cases.

There have been 45 cases of the Delta variant – the B.1.617.2 mutation – identified in Oldham, according to statistics released by Public Health England yesterday.

In the latest local data released by the government on Friday, 20 areas of Oldham saw cases increase during the seven days to May 29.

The two biggest hotspots were around the town centre. Werneth and Oldham Town North both saw 18 cases in the week.

This was an increase of ten on the previous week for Oldham Town North, while Werneth had increased by 13 cases in seven days.

This was a 260pc rise for Werneth and a 125pc rise for Oldham Town North.

Failsworth East saw the third highest increase in cases, rising from two up to 11.

There were 12 cases recorded in Chadderton Central, up by five from the previous week.

The areas of Alt, Busk and Limeside and Garden Suburb all saw ten cases, while there were nine recorded in Chadderton South East.

However, in eight areas there were two or fewer cases, meaning that Covid-19 could be suppressed completely.

These included the Saddleworth areas of Diggle, Delph and Denshaw, Greenfield and Uppermill, and New Delph, Dobcross and Austerlands.

Neighbourhoods in the Shaw area – Shaw and Crompton, Clough and Shaw Side – and Royton – Royton East and Cowlishaw and Royton South West – have also recorded two or fewer cases.

As of the week ending May 30, Oldham’s infection rate per 100,000 people stands at 75.5, more than double the national average.