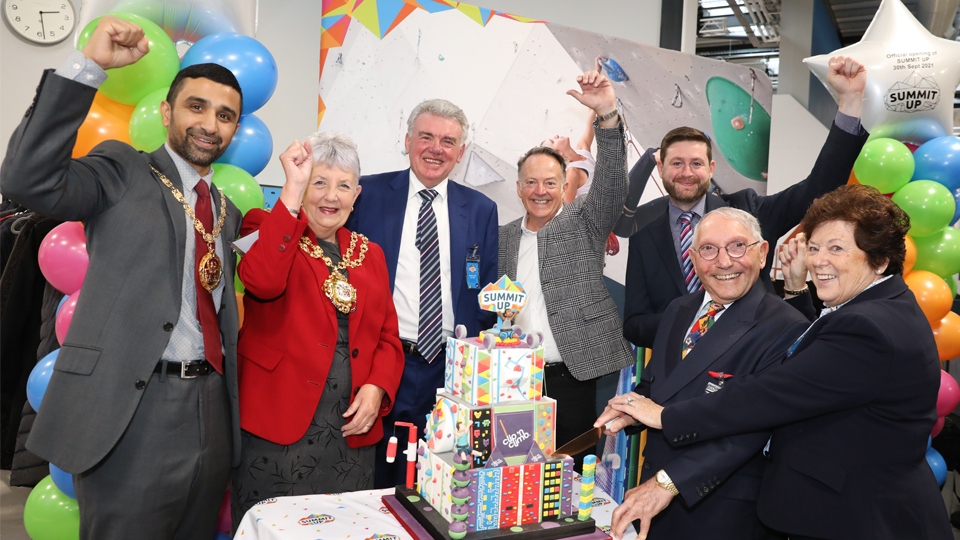 Celebrations at Summit Up

Oldham's new climbing centre has attracted thousands of visitors during it's opening weeks.

Summit Up officially opened its doors on 30th September following a 2-week launch period where they welcomed over 2000 adventurers. The climbing centre has attracted climbers of all abilities to tackle Olympic standard climbing walls, climbing routes, speed walls and dedicated two-tier bouldering area including a floating boulder.

A major driving force behind the centre’s success is the inclusion of fun-climbing franchise, Clip ‘n Climb, which since opening has welcomed 1675 individual climbers and over 90 children’s party bookings. The centre also seemed to be a hit with families with 228 soft play bookings recorded.

To mark the official opening of Summit Up, Sir Norman Stoller CBE KStJ DL, Chairman and Founder of the Stoller Charitable Trust, hosted an event for local dignitaries and community members in celebration of the new climbing centre. Sir Norman says he's positive about the future of the centre.

"I am confident that Summit Up, as a trading subsidiary company of the Stoller Charitable Trust, will not only be successful in its own right, but, because the distributable profits are to go to charity, my Trust can continue to provide a helping hand to those in need. I can’t think of a more desirable outcome for the hard work and endless hours of planning, design and construction that has been required to make this possible, and I will always be grateful to those involved for it."

Summit Up is funded by The Stoller Charitable Trust, a charity that funds projects across the north west, with paricular interest in the advancement of young people. The purpose-built climbing centre aims to provide a fun and safe space for the community to experience something new and push their limits. All profits generated by Summit Up will go directly back into the Charity.