You are Here: Home » News » Main News » Huge solar energy farm could be built alongside Rochdale Canal in Failsworth 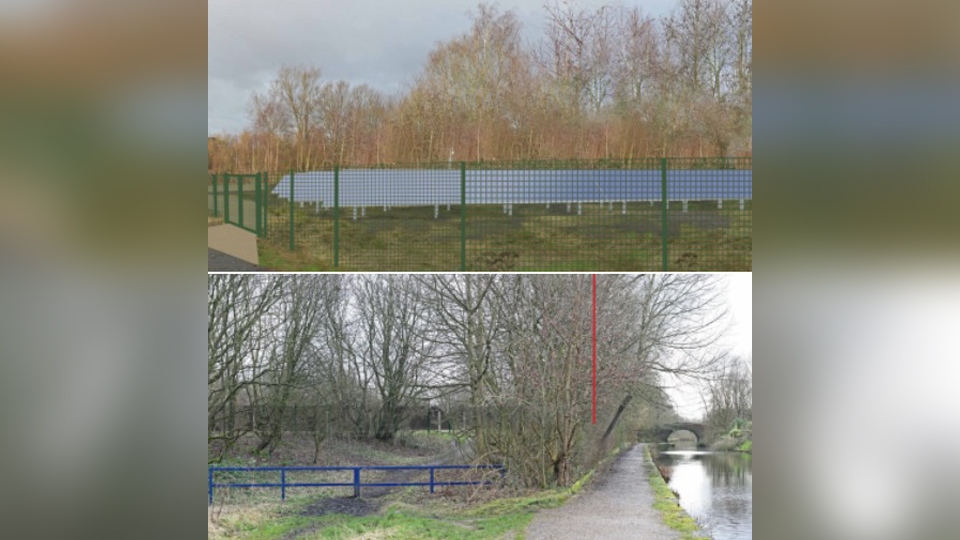 How the solar farm could look when installed in Failsworth

Plans to build a new solar energy farm alongside the Rochdale Canal are to be decided by councillors.

Oldham council has applied to install around 2,700 solar panels on more than 3.5 acres of land at Wrigley Head in Failsworth.

The site, which is bounded on either side by the Metrolink and the Rochdale Canal, is owned by the town hall and is made up of ‘partial hardstanding’ and birch trees.

Historic maps suggest that it was formerly used as a football ground, then as an industrial site and bosses say it is now used for ‘informal recreation; including dog walking’.

The area was selected by the town hall after several months of scoping out sites owned by the council, with an alternative site being rejected as it is in the green belt.

Under the plans the Failsworth plot would become a solar farm for a ‘temporary period’ of 30 years from when it begins to generate electricity.

The panels would be mounted on a rack with a maximum height of 2.4m.

According to the planning committee report, landscaping would include tree clearances, ‘compensatory replanting’ and wildflower meadows that ‘seeks to enhance the overall biodiversity on site’.

A supporting statement on behalf of the council says it recognises that ‘climate change as one of the most pressing issues facing humanity in the 21st century’.

“The proposed development would support Oldham council to utilise an unused land asset within their ownership for electricity generation, that will be fed into the UK national grid and can be offset from their overall electricity usage,” it states.

“The efficiency savings achieved by the council through the reduction in bills will free up money for services.”

The report states that the council proposes to offer educational visits to schools of the site once it is up and running.

There have been no objections received against the proposals.

Councillors will vote on whether to grant permission at a meeting of the planning committee on Wednesday, December 8.