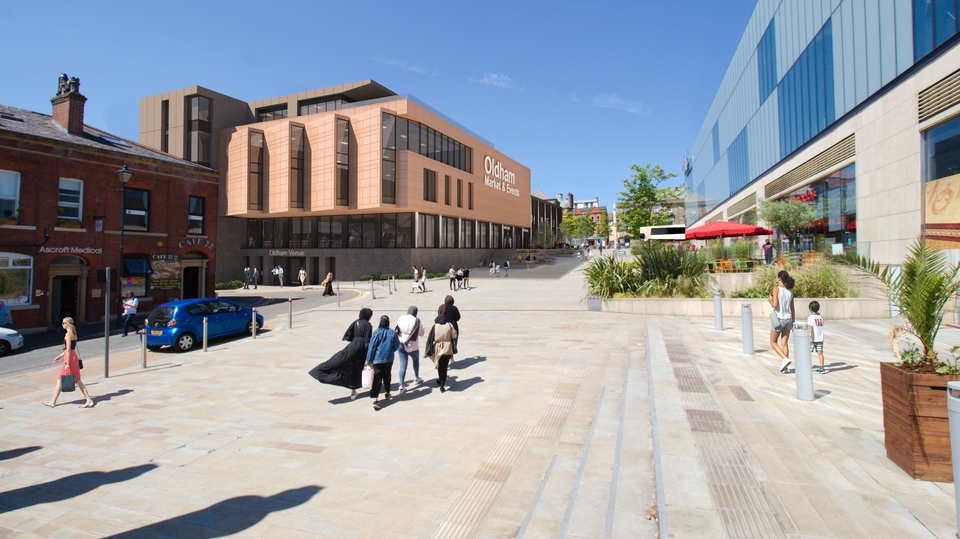 How a redeveloped Spindles will look from Parliament Square. Images courtesy of Oldham Council

Major plans to redevelop a council-owned shopping centre to create a new market hall, offices and event space are to be decided this week.

Officers are recommending approval for proposals to transform Spindles Town Square Shopping Centre, which the council purchased in 2020 for £9.5m.

The application, which was lodged earlier this year, is due to go before the planning committee to be voted on by councillors tomorrow (Wednesday, June 8).

Initially a plan set into motion by former leader Sean Fielding, the redevelopment masterplan was continued under the leadership of Arooj Shah and if approved, work could begin later this year with Councillor Amanda Chadderton heading up the town hall.

There have been no public objections or messages of support lodged against the application.

Under the principle of development, the report to the committee states: “The redevelopment is central to the council’s Creating a Better Place regeneration strategy that will increase footfall in the town centre, unlock valuable brownfield sites for new homes and public open space and generate significant public benefits.”

The report states that the development will be able to accommodate 1,750 full time jobs once completed, generating around £83 million.

Under the plans the upper mall floorspace would be converted into ‘flexible high quality’ offices, which will include co-working spaces, and there would also be solar panels mounted on the roof.

Bosses have stated that council staff will be moved from the Civic Centre offices into the new Spindles site, freeing up the old council HQ site for redevelopment.

The authority says the proposals will help save more than £8m over the next four years by reducing corporate landlord and a backlog of maintenance costs.

A former Town Square shop and a section of the car park would be turned into a new archive and heritage space to publicly exhibit Oldham’s artefacts and museum archives that are not currently on display.

This area would be in place of the proposed use of the former historic library building on Union Street as a heritage centre.

The ground floor of Spindles will continue to house the ‘core offer’ of shopping and retail units.

And a new events space would be built above the new market, bringing a new venue for private and public functions and community use to the heart of the town centre.

This would replace the Queen Elizabeth Hall, and be used for functions including weddings, conferences, live music, parties, election counts and exhibitions.

It would include a bar and kitchen facilities, and have a ‘culturally sensitive’ design.

The event space is proposed to be open from 9am until midnight and would have its own security separate from the shopping centre so it could be used out of daytime hours.

Planning permission was granted for the demolition of the TJ Hughes unit in the shopping centre earlier this year, which will be replaced by the new Tommyfield market.

Under the latest plans, the replacement unit would extend into Parliament Square, with an entrance created to the new split-level market.

The new Tommyfield Market would have a food court, as well as a dedicated retail market linked to the shopping mall.

The produce market will continue to be open from 9am to 5.30pm Monday to Saturday, and from 10.30am to 4.30pm on Sundays and Bank Holidays.

However, it is ‘envisaged’ that the food court would be open from 11am to 11pm daily.

Under the future plans the old market on Henshaw Street will be demolished and replaced with housing and a new 5.7 acre town centre park.

The works to transform the shopping centre are being ‘partially financed’ from £12m of government Towns Fund grant funding.

The committee report concludes: “The proposals involve the redevelopment of an important and prominent site within the town centre, which will ensure benefits in reinvigoration of the existing retail core, along with longer term benefits associated with redevelopment of the wider town centre.

“The proposals will enhance the viability and vitality of Oldham town centre by encouraging additional footfall and stimulating the night-time economy.

“The environmental benefits that could be secured by the development include redevelopment of a prominent brownfield site in the town centre creating a new development of high design quality, and delivering a biodiversity net gain improvement.”