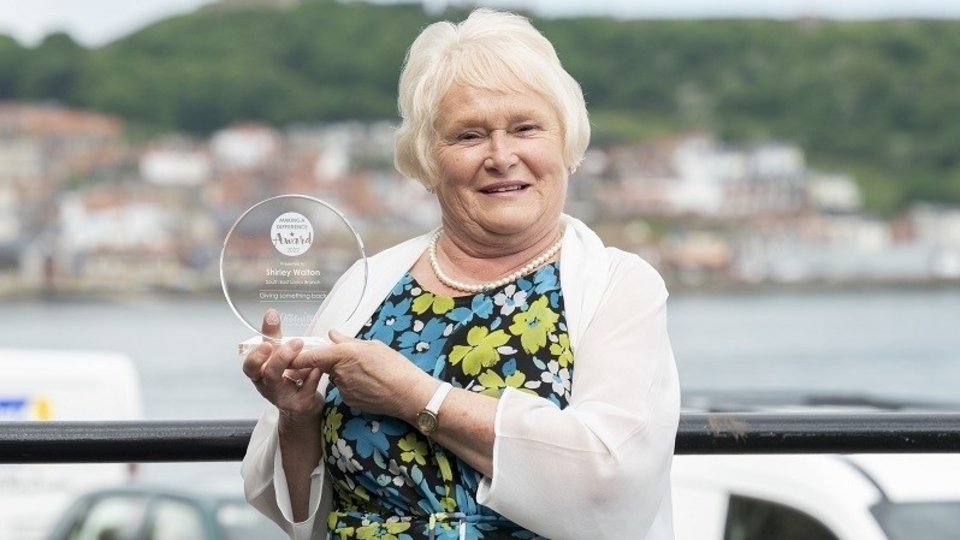 Shirley Walton from Grasscroft has been presented with a prestigious award for her outstanding fundraising efforts during the challenges of lockdown.

Shirley came first in the category of ‘Giving Something Back’ at the Oddfellows’ national Making a Difference Awards, held as part of the Society’s annual conference in May this year.

The award is to celebrate an individual’s success and drive in organising or participating in fundraising activities for charities or good causes.

One such example is how Shirley stopped at nothing to raise funds for a cause dear to her heart – the North West Air Ambulance.

After a close friend’s son’s life was saved by its crew, she chose the charity to fundraise for in her role as Provincial Grand Master (District Chair).

Shirley joined the Society’s Todmorden Branch back in 2006 and held the prestigious role of Provincial Grand Master in 2019, where she devoted a year of her life to raising funds.

She became very active in running social events in and around South East Lancashire.

From coffee mornings to brass band concerts, chasing up support from supermarket managers, restaurants, jewellery makers and more, she worked like a dynamo to raise money and awareness of what she calls ‘our fantastic Society’.

In total, she raised £9,000 for her beloved charity, North West Air Ambulance.

Shirley explained what motivates her to work so hard on a voluntary basis for the Oddfellows.

She said: “We can all give something back, even if it’s just a kind word or a smile.

"In the Oddfellows, we all give back, through care and welfare, running events and making sure people get together.

"But we receive so much just by being a member.

"We are what we say, a friendly society run by members for members.”

CEO of the Oddfellows, Jane Nelson, added: “The Oddfellows is known for its fundraising as a Society, but this achievement as an individual is outstanding.

"Shirley stopped at nothing to raise as much as she could for North West Air Ambulance, networking with everyone she made contact with to fundraise and at the same time to build awareness of our Society.”