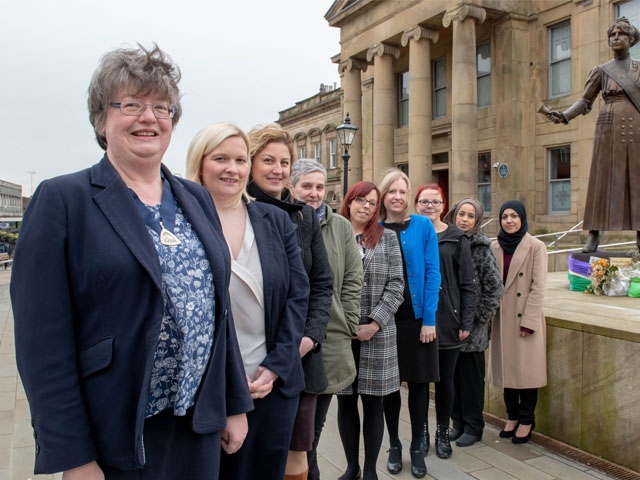 Oldham Law Assiciation marks the 100th anniversary of a historic change for women entering legal professions such as solicitors and barristers.

A number of lawyers from different legal firms gathered at the new Oldham Town Centre statue of suffragette Annie Kenney to highlight the centenary of the Sex Disqualification (Removal) Act and hear about pioneering women in law, including pioneering local magistrate Ada Summers.

For over 100 years, Oldham Law Association has represented solicitors working or living in the area. It lobbies Government and other organisations on issues that affect the legal profession, and also provides training opportunities and social networking events for local law firms.

The gathering heard how, in 1888, Eliza Orme was the first woman to gain a law degree. However, it was not until later, when the 1919 Sex Disqualification (Removal) Act came into force, that four women with first-class degrees from Cambridge University were allowed to pass law exams and become lawyers.

Women faced a long struggle for equality throughout the 1800s and early 1900s. Just a few years before the 1919 act was passed, there had been a legal ruling preventing women from qualifying as solicitors. The 914 ruling at the Court of Appeal, in a case called Bebb v Law Society, found that the entire sex of women failed to fall within the definition of ‘persons’. However, the Sex Disqualification (Removal) Act of 1919 ultimately set the agenda for change.

Locally, Oldham-born Ada Summers becomes the first British woman to sit as a magistrate in 1919. She was sworn-in as the first female Justice of the Peace (JP) on December 31, 1919, one week after the Sex Disqualification (Removal) Act was passed.

Ada Summers was also a philanthropist, using her inherited wealth to fund causes including a maternity and child welfare centre, a nurses home and an employment centre.

She said, “Over half our solicitors are female, so we are well on the way to achieving the goals and aspirations of those early female lawyers.  Through this law association event, we wanted to recognise and raise awareness of their pioneering work and achievements by bringing together contemporary Oldham female legal professionals.

Huge progress has been made, with women now representing just over 60 per cent of newly-qualified solicitors and nearly 50 per cent of all solicitors. However, there is no room for complacency. And events such as this highlight the historic work done by women in Oldham for votes and for equal access to careers and work of their choice.”