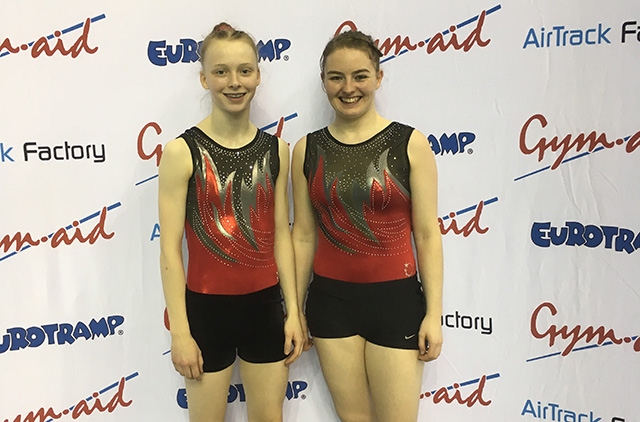 Held the English Institute of Sport in Sheffield, they competed alongside many of the country’s best trampoline, tumbling and double mini trampoline gymnasts.

Hannah Bucys, aged 15, became English Champion in the 15-16 age group, while Ruth Shevelan (25) from Stockport won the silver medal in the Senior Women.

Ruth and Hannah were among the gymnasts to qualify.

Hannah’s aim was to finish in the top eight in the preliminary round, which would mean she qualified for the final.

At the event, Hannah exceeded all expectations, placing second in the preliminary round and retaining her position in the final, winning a silver medal with a personal best performance.

Ruth was competing in the Senior Women’s Doubler Mini Trampoline competition for the second time, but a mistake in her first pass meant she was left with no chance of finishing in a medal position.

She showed enormous determination to complete her second pass well enough to qualify for the final.

Personal best scores in the final round meant Ruth finished in seventh, with the knowledge she can challenge for British and hopefully World medals in 2019.

With the National League Finals and the North West Championships still to come this year, Dynamo Trampoline Academy have had a fantastic season.

At the National Trampoline Finals next month the club have qualifiers in 12 different events and are hoping to continue their successes.

Dynamo Trampoline Academy began training at OCL’s Oldham Sports Centre six years ago, in 2012, when it was known as Stockport Trampoline Club.

The height of the sports hall allows the use of a more powerful trampoline bed, meaning club members can train on equipment used in national level competitions.

“The club and coaches are very proud of what these gymnasts have achieved during this season; their hard work and determination have definitely paid off.

"We are looking forward to building on these performances and results for the future.

Ruth Shevelan lives in Stockport and combines training at Oldham Sports Centre with her work as an engineer.

Chris Lunt began training when he was 17.

He now lives in Stockport, works in computer programming and is a casual trampoline coach at OCL.