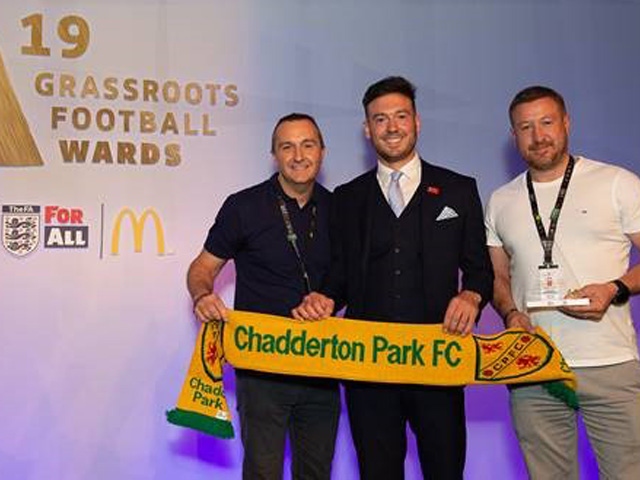 Chadderton Park Juniors Football Club was established in 1979 just so a few local children could play football, in the last 15 years the club has grown from just having a few teams to boosting over 90 teams covering football for Boys, Girls, Men, Woman, and children with disabilities (Mainly cerebral palsy).

Being a community club the club decided to expand from just football and introduced Netball, Rounders and launched a very popular ‘Steppers’ walking group that is open to everyone to help with loneliness, depression and mental health amongst other benefits.

The club now has along with the 92 football teams 15 netball teams covering juniors and adults, over 1000 children and adults are now playing for Chadderton Park. We even have some teams in Uganda, Rwanda and Kenya where we send our old kits, a Childrens Orphanage in Kenya has since changed its name to Chaddy School http://www.chaddertonparkfc.co.uk/kenya.htm

2 players from the club Jade and Christian are part of the Sign along with us group who won the runners up place in this year’s Britain’s Got Talent.

In 2013 The club was awarded Oldham sports club of the Year ,

Including a visit to Buckingham Palace.

2017 Finalist of the National Diversity awards

Unknowingly to the club, having won the English FA award in 2019 they were automatically entered into the UEFA grassroots awards which had all the winners from all 55 European FA’s

Chadderton Park Sports Club were awarded the Silver Award in the UEFA club of the Year 2020,

There are approx. 1.1 million grassroots teams in Europe.