You are Here: Home » News » Local Sport » Bright start not quite enough in local derby

Bright start not quite enough in local derby 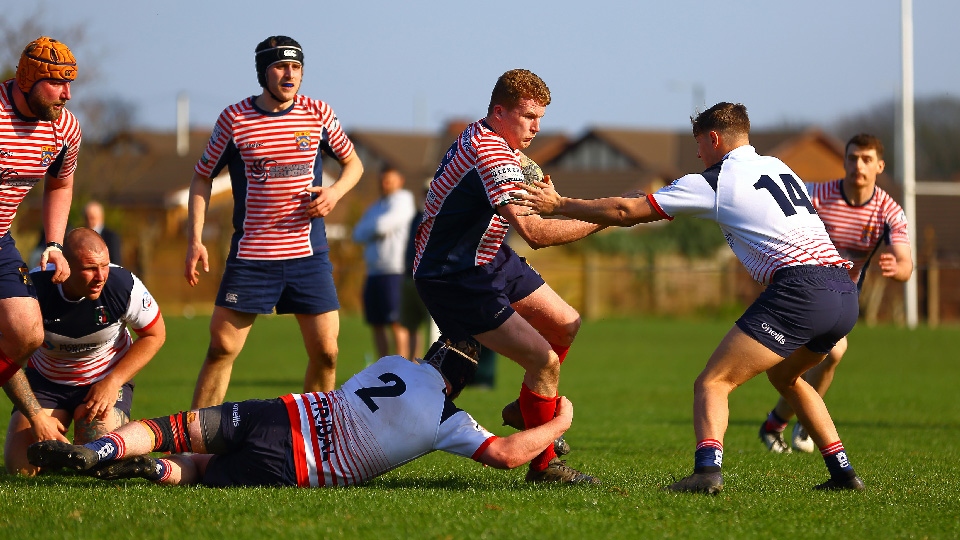 The closest of Manchester derbies took place on Saturday as Oldham travelled a couple of miles to play Aldwinians. Oldham named 19 but lost Josh Watson on the Saturday morning to another injury curse.

The sun was shining and the pitch was hard, so a day for running rugby was on the cards.

Oldham received the kick off and began brightly to get hold of some possession and work up field with some decent structure.

From a lineout on Aldwinians 22, Jordan Butch McEwan went through a gap and with a lovely inside board found Adam Takila who touched down for a near flawless start for Oldham.  Alex Jobson - who has made a big difference to the back line since returning - kicked the extras and Oldham were 7-0 up.

Oldham continued to gain momentum with some more good play and the big difference being composure in possession.  Some last ditch defence kept Oldham out from another two tries.

The pressure from Oldham led to a penalty around the 20 minute mark, and Alex Jobson added it to make it 10-0.

Aldwinians finally then woke up from the kick off and worked their way back into the game.  They had the measure of Oldham at scrum time and had some good runners around the ruck. Aldwinians initially scored from a lineout 5 metres out but the ref did not award it for which no one really knew why.

They did score though just before the break beating Oldham for numbers on the side of a ruck so Oldham went in at the half 10-7 up.

The second half started well for Oldham with pressure again exerted on the Winnies' line and Ryan Pickles made a dart down the blind side before giving an exquisite out the back door pass for Phil Whitham to dive over.

However, Oldham couldn't seem to get hold or keep possession, giving penalties away at the breakdown when they didn’t really need to. This gave Winnies a chance - which they took with a converted try and penalty to boot which took the score to 17-15 in winnies favour.

A small melee after the try led to Ryan Arundale being yellow carded and during which time, Winnies scored again.

The talking point of the day then came when the conversion was clearly missed and the touch judges did not raise the flags but the ref gave it..

Oldham were still trying to get some quality ball, but pressured Winnies on their ten metre line and Alex Jobson kicked through and collected the ball to score in the corner. A touch line conversion made it 24-22.

With a couple of minutes to go, Oldham had a line out on the Winnies 22 and caught and drove. With a Winnies player coming in at the side to drop the maul everyone expected an Oldham penalty that didn't arrive.

What can be said is that you shouldn't blame a referee for the outcome of a game and as a team you have to do enough to take these variables away and you should do enough without them.  Oldham didn't, however.  They played probably the most structured that they have played all year. The ball movement was much better with the backs looking dangerous with ball in hand.

Two games to go, with the last home game vs Eccles to come first.

Man of the Match: Alex Jobson